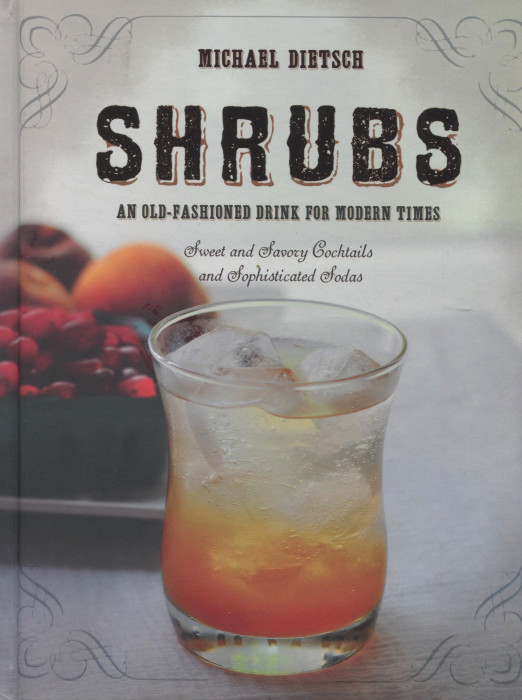 Just to be clear, I love this book. I have tested more recipes out of this book than any other I have ever reviewed. And I’m not done.

If you drink beverages, alcoholic or not, if you enjoy flavored water of any kind, or just water, then Shrubs is a book for you, one you can employ every day. Since we all drink at least water, you really can benefit from Shrubs.

Oh, if you hadn’t noticed, this is a book about shrubs as in things you drink, not the things you plant. The story of drinkable shrubs is a cultural tour covering centuries. It’s such a good story, please indulge me.

There is an Arab word sharab that means to drink. From that root, and from food development, have come sherbet, sorbet, syrup. And the drinking form of shrub.

Drinking something sour, some vinegar based beverage or lemonade, is an age-old way to stimulate saliva which triggers your appetite and even alerts your digestive system to get ready. In alcohol-free Muslim lands, vinegar based beverages arose as a major form of liquid refreshment. Actually, Roman legionnaires drank water with vinegar, the vinegar serving to protect against contaminants in the water.

Besides vinegar beverages, in the Middle East the first sherbets were developed. Not ice cream-like desserts. Sherbets were, and still are, sugar tablets infused with citrus, herb or nut flavors. Dissolved in water, they are most refreshing.

In England, four hundred years ago these sherbet tablets were widely enjoyed. And then the changes began. The clever British started deleting the sugar part, emphasizing the citrus, and adding rum or brandy to these beverages. Then putting the concoction in barrels and the barrels on ships. Sailors drinking the beverages daily were said to be much happier. That was the contribution from the rum, I suppose. And the high levels of citrus solved an ongoing problem: scurvy.

By the time of the American Revolution, shrubs, as they were then called, were widely enjoyed. In Shrubs you can find the recipes followed by Benjamin Franklin, and Martha Washington.

At the same time, in fruit-rich North America, people began making fruit vinegars, literally adding fruit and vinegar together as a way of preserving the fruit. And, as a way of forming the base for a beverage. You could drink a fruit vinegar directly, but the tradition was to dilute with water, or something alcoholic.

In the 1800s, the two very different beverages began to overlap and become confused. The fruit vinegars also began to be called shrubs. The two co-existed for a hundred years, made at home or purchased in stores. In 1895 you could by a rum-based shrub at Bloomingdales for a mere $5 a gallon.

World War I spelled the end of the both shrubs as popular drinks. The alcohol versions were the victims of Prohibition. The vinegar versions faded as people got home refrigerators, or ice boxes, and started stocking them with sugar-rich sodas.

Shrubs languished until 2004 when a series of articles in The Wall Street Journal spoke of the magic of shrub cocktails and promoted the handful of boutique firms still making shrubs.

Author Michael Dietsch was intrigued then addicted. This book is the product of his years of experimentation in making shrubs from just about anything he could get his hands on. Not just sweet berries but also plums and cranberries, cucumber, ginger, and, it’s true, tomatillos.

Along the way, Michael refined the techniques for making a shrub, which can take 10 minutes if doing it with cucumbers but really needs three days if doing the blackberries with lime zest. He offers advice on what kind of vinegars to use and how to adjust the sugar and vinegar levels so you fashion your own personal shrub.

How do you make a shrub? If it’s cucumber, the cucumber, sugar and vinegar go into a blender. You zip, sieve, and enjoy. If it’s, say, berries, the berries and sugar are muddled together and sit for day. Then vinegar is added on Day 2. You can strain then and be done, but I prefer to let it all sit in the fridge for another day, then sieve it. Or, if you can take a little body in you beverage, keep all the little berry pieces. That unsieved blackberry shrub mixed in equal proportions with bourbon gives you a viscous cocktail with a symphony of flavors.

Shrubs has recipes for sweet shrubs based on fruits. Then a section of more savory and sour shrubs, offering recipes with tomatillos and golden beets with coriander. There are sections for new cocktails Michael has invented along the way plus updated classics now using his shrubs — like his Cherry-Mint Julep.

You can use the shrub with water, sparkling water, sparkling wine, or the booze of your choice: rum, gin, bourbon, … There is an endless span of combinations here, made all the richer by the way you choose to make your particular shrub — how much vinegar, what kind of vinegar, the level of sugar.

The downside? Your refrigerator will fill up. Your spouse may complain. What to do? Take out the wonderful Strawberry-Pepper Shrub, add some rum and offer up a sacrifice to the beverage gods.

When you buy Shrubs, buy some pint and quart jars with sealing rubber lids. You are going to need them.

One last note. I’ll post a couple of shrub recipes here and cocktails to go with them. I can’t reproduce all the wonderful shrub ideas from Shrubs here. You need your very own copy sitting right next to your blender.