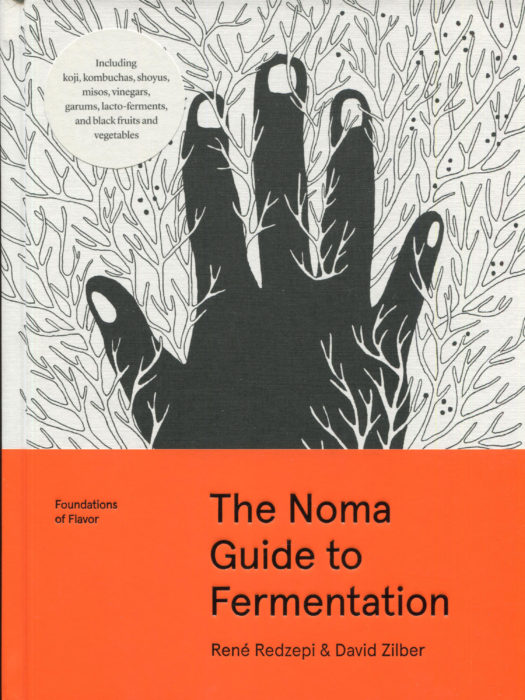 Just outside of Copenhagen, there is the world-famous restaurant Noma. It’s a castle of both great food preparation and great recipe development. In this massive volume, 450 pages, Noma give us perspective on the role of fermentation in cooking.

Oh, you don’t ferment things? You don’t use fermented products? Uh, time to rethink how you eat. To quote this book: “There are thousands of products of fermentation, from beer and wine to cheese to kimchi to soy sauce. They’re all dramatically different creations, of course, but they’re unified by the same basic process. Microbes — bacteria, molds, yeasts, or a combination of thereof — break down or convert the molecules food, producing new flavors as a result.”

Not all means of fermentation are explored in this book. Alcoholic fermentation and charcuterie and dairy and bread [yes bread] are bypassed here. There are seven fermentation techniques that are employed at Noma: lactic acid, kombucha, vinegar, koji, miso, shoyu, and garum. Those are not all techniques you might expect to find in Copenhagen, but let’s explore each of them a bit and see how they can play a role in your culinary life.

Lactic acid is explored in the chapter Lacto-Fermented Fruits and Vegetables. Yes, cucumbers are the example that pops into our minds, a treat most of us love. At Noma, lacto-fermented elements appear in almost all dishes. There are techniques here for plums, mushrooms, tomato water, white asparagus, blueberries, mango-scented honey, and green gooseberries. That’s a broad territory beyond cucumbers.

What do you do with lacto tomato-water? You make a different pickle.

Kombucha is a soured and lightly carbonated fermented beverage. It is historically made for sweetened tea and has origins in Asia and eastern Russia. At Noma, they make juice pairings as substitutes for wine. And they cook with it, as well. You’ll find recipes here for lemon verbena, rose, apple, elderflower, coffee, maple, and mango.

These recipes all come with suggested uses. So, if you have rose kombucha, you have the start of a rose-plum sauce for duck or a gin and rose cocktail. That coffee one? It’s destined for tiramisu.

We all know all about vinegars. Or do we? In the Vinegar chapter we find ideas for pear, plum celery, butternut squash, whisky, gammel dansk, elderberry wine balsamic, and black garlic. Butternut squash? Use it for carrots. Gammel Dansk is the classic herbal liqueur of Denmark, their northern Amaro. It’s to be added, in small but powerful portions, to salad dressings or beef bourguignon.

Alright, now it’s time to travel to Asia. Koji or The Magic Mold. It is rice or barley that has been inoculated with a particular fungus which then grows and spreads. I’m mystified here and I leave it to you to find this book, breeze to Chapter 5 and see if this is for you. I’ll try it. I will. But, not tonight.

Miso is another Japanese idea brought to Copenhagen and subjected to experimentation. There are eight versions presented here, including Pumpkin Seed Miso. You can employ that in a riff on Mexican salsa or toss with salad.

Shoyu, or soy sauce, was surely discovered by accident millennia ago. Now, there are tens of millions of tables around the planet with a bottle or two ready for use. As you might expect, Noma’s versions are not conventional: yellow pea, cep, and coffee. That coffee one can be used to glaze fish or make a butterscotch dessert or to up a chicken broth.

And then there is Garum. Garum, wonderful garmum. You don’t know garum? Well, you didn’t read Latin in high school. Garum started as Roman fish sauce that, to be frank, was so intense you could put it on food not fit to be eaten and have a chance to survive. The aroma was said to be awful. Today, you actually have a descendant of garmum in your fridge: Worcestershire sauce. Ah, but at Noma the flavor now comes a tad differently: beef, rose and shrimp, squid, roasted chicken win, grasshopper, bee pollen, and yeast.

Yes, I know: Grasshopper Garum. At Noma, you can get a savory pancake. It is cooked in grasshopper butter, brushed with this garum, then folded and filled with red onion and crème fraiche. I cannot imagine. But, I promise you this: the next time Suzi and I are having brunch in Copenhagen, it’s a Bloody Mary and these pancakes. I am not eating grasshoppers without a Bloody Mary.

Half this book is filled very intense descriptions, techniques and precise detail. It’s a textbook, something you will NOT breeze through. But the ideas here are enchanting. So different, so intriguing, that you really have no option: you need to have this heavy book on your lap and leaf through it with a good cup of coffee. Oh, coffee is product of fermentation. See? It fills you life and The Noma Guide to Fermentation will fill your life to overflowing.