Baked Tomato with Sausage, Egg, Cinnamon and Chile from Big Flavors from a Small Kitchen 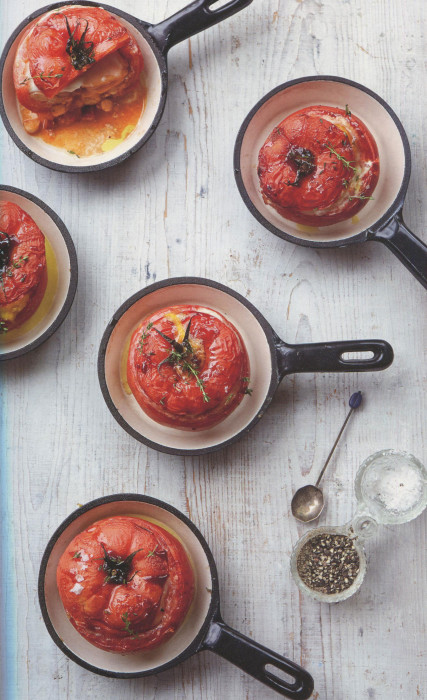 The recipe comes from Big Flavors from a Small Kitchen. Author Chris Honor was born in Australia and now has a small restaurant in North London. In Big Flavors, there are no recipe titles per se. He just lists four or five ingredients at the top of each page. Here the fabulous four are: tomato, sausage, egg, cinnamon and chile. It’s the cinnamon here that caught my eye. Tomato and cinnamon, hmmmm, what is that going to taste like? I have no idea, but Suzi and I will find out.

Like many of the dishes in Big Flavors, the ingredient list is intriguing but short. The preparation is swift. The satisfaction will last through the day. This is a lovely brunch recipe. Serve with a side salad, maybe some biscuits, and a fine glass of very cold white wine.

Slice the tops off the tomatoes and reserve, and then scoop out and discard the insides.

Heat the oil in a pan, add the onion, and cook until opaque.

Add all the remaining ingredients, except the eggs, and cook for a minute or so, then transfer this mixture to the hollowed-out tomatoes, dividing it equally between them. Only fill them about two-thirds of the way up or less, depending on the size of the tomatoes, so that you have enough room at the top of each one for an egg.

Break an egg into each tomato and replace the tomato tops, then arrange the filled tomatoes in mini ovenproof skillets or heatproof dishes, and bake until the egg has set. Serve.