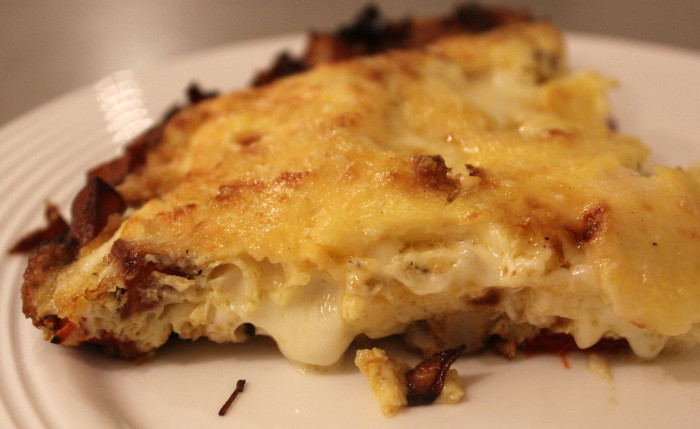 My wife runs a cooking school, Cooking by the Book, and does so with passion. So much passion, that by the end of the week, Friday night, she can be “over the edge.” It’s 7PM, she’s hungry, and she’s low, low on energy. We could walk and in less than five minutes be in one of twenty neighborhood spots for good food. We could pick up the phone and, in less than thirty minutes, have something hot and spicy delivered.

But when Suzi is over the edge, decisions are hard. I went to the refrigerator and starting pulling out things: eggs, some leftover cheese, a red pepper, a log of chorizo.

“How about a frittata?” I suggested. Even if she is out of gas, Suzi can always stand near the stove.

Soon, things were flying. The cheese I had pulled out was no longer a leftover. Suzi declared it dead, but she did find some lovely mozzarella. The chorizo was rejected which, since Suzi is a chorizo addict, surprised me. However, when she is over the edge, anything is possible.

I hadn’t thought about a potato, but she grabbed one, peeled it, cubed it and began cooking in her favorite 10” cast iron pan. In a kitchen with fifty pans of different sizes and surfaces, that is “her” pan and she instinctively grabs it.

In twenty minutes, Suzi seemed more relaxed. This gooey, yummy dish was on our table. Our wine glasses were filled. If we’d been seeking a “full” meal then a side salad would have been the natural pairing.

Instead, we just had more wine.

Your own “out of energy and can’t make a decision” night may be on Friday or today, Monday, or any night of week. When it happens, consider the Friendly Friday Frittata.

Yield: serves 6 as a main course

Take a cast iron skillet, 10” is ideal, and cover the bottom with a thin layer of olive oil. Begin to heat on medium.

Break and stir in the eggs. Cook for a moment. Fold in any protein, like that chorizo, or herbs your desire. Cook until solid, adding salt and pepper to taste.

Put the cheese on top. Place in the preheated oven for 7 minutes. Then turn on the broiler to have a minute or two of high heat. Brown the top, but do not blacken.

Serve piping hot. Either with a salad or a full bottle of wine. Or both.