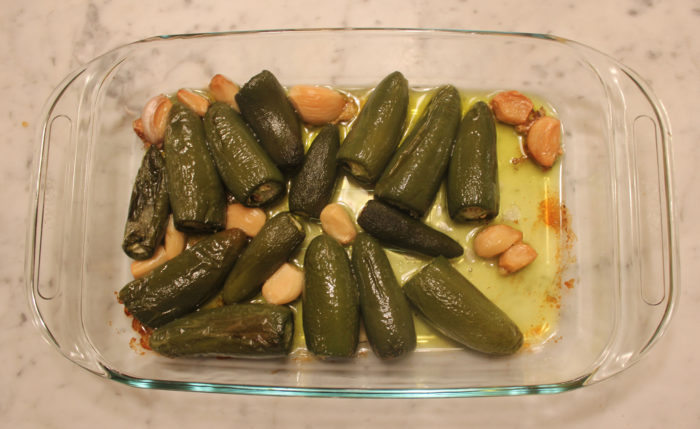 I feel badly but I don’t know where I got this recipe. It’s from some book that Suzi and I have, but we have about five thousand cookbooks now and … It’s wonderful and I thank the creator.

I must agree. At times. Lately the jalapenos just don’t seem to have the fire that make me sweat the way a chipotle does.

Until now. Use this puree at your own risk! It’s hot, strikingly hot with just a touch of roasted garlic sweetness.

You can use this puree anywhere: on main courses like roasted meats, on nachos, on your burger, … It’s as universal as mayonnaise. Just a lot hotter. Once you make this, it will store in your fridge for a month, your freezer for up to six months. Use often, but do use sparingly. It’s as hot as one of those real, old-time peppers.

Roast for 30 minutes. Turn and roast for an additional 30 minutes, or until the peppers and garlic are very soft.

Cool. Transfer to a food processor and puree, adding the salt.

Spoon the puree into ajar with a tight-fitting lid. Cover and refrigerate or freeze.