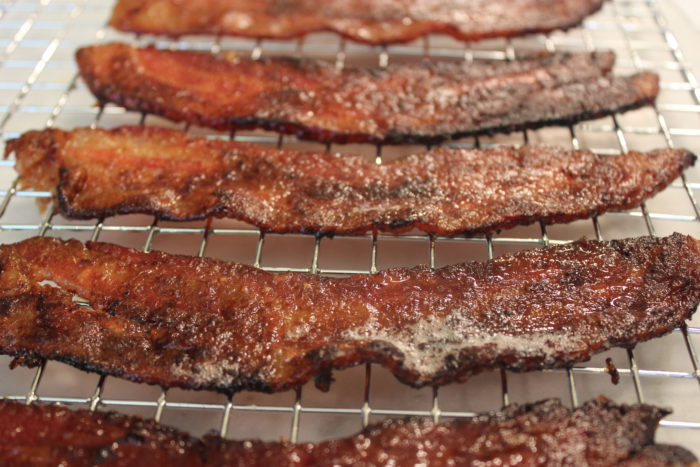 In the age of Ikea, few of us make furniture from scratch anymore. And when was the last time you used lacquer? I was a teenager and I was just sniffing, not finishing furniture at all.

You will be sniffing here, too. Suzi and I began playing with our bacon a few years ago. Rather than pan fry, we bake it in the oven with a generous sprinkling of brown sugar.

This recipe, from A Real American Breakfast by the grand team Cheryl Alters Jamison and Bill Jamison, goes much further. You make a culinary lacquer of mango chutney, apple juice, mustard and vinegar. Apply to the bacon and bake until it is done. Sticky, crunchy, sweet and so delicious. This will change your idea of bacon.

Options? Instead of mango chili use a red-chile honey or chile jelly or just pull something sweet and hot from you self and have fun.

Stir the chutney, juice, mustard, and vinegar together in a small bowl.

Arrange the bacon in a single layer on a baking sheet. Bake the bacon it begins to look opaque and the fat begins to render, 10 to 12 minutes. Pour off any accumulated drippings.

Turn over the bacon and brush about one half of the glaze on each piece. Return the bacon to the oven and cook for 3 to 4 minutes longer, the bacon from the oven and turn it over again. Brush it with the remaining glaze and return it to the oven for 3 to 5 minutes, until well brow firm. (With the glaze coating, the bacon gets chewy and crunchy just short of crisp.) If you want to drain the bacon, do it on a rack rather paper towels to avoid wiping off the glaze. Serve warm.