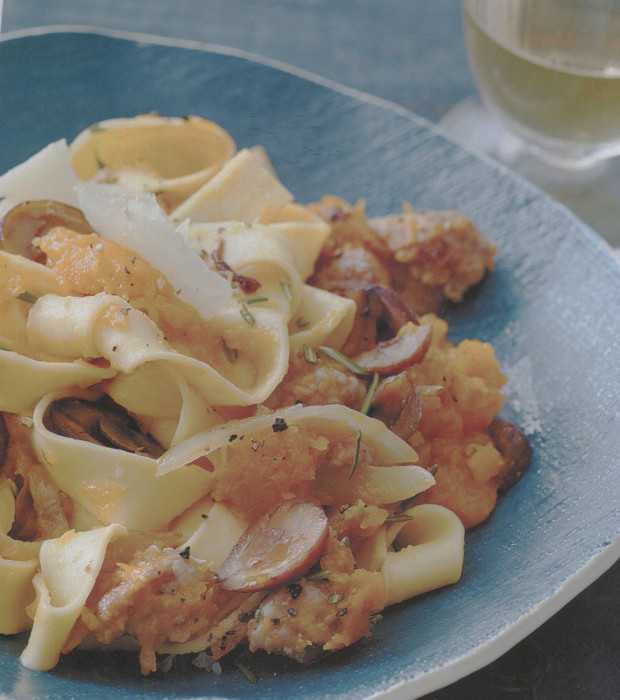 It’s pumpkin season and time to marry those pumpkin flavors in fall Italian dishes: risottos and pasta. When it comes to pasta, nothing can surpass the luscious body feel in your mouth of tagliatelle. These “torn” lengths of pasta seem to ooze comfort with every bite. In Naples, a traditional pasta toping is chestnuts with butternut squash or pumpkin.

In an Italian fall, you will still see people flocking to the hillsides, harvesting chestnuts and mushrooms. Nut sauces are widely used in Italy, far less so here. The marriage of chestnut and pumpkin is fall at its Italian best.

This recipes is from Nonna’s House by Jody Scaravella, a book filled with authentic recipes from ten Italian grandmothers who are the chef team at Jody’s Staten Island restaurant Enoteca Maria. The restaurant is a clever and successful one. So is this lovely recipe for the sauce. To prepare the dish, cook the tagliatelle to your preference, or follow the directions below, and add this intense, earthy sauce.

For review of Nonna’s House and list of some of the best recipes in the book, just follow this link.

Tagliatelle with Pumpkin and Chestnuts

Pour in the wine and bring to a simmer. Cook, stirring occasionally, until the liquid in the skillet has reduced to about ¼ cup. Transfer the roasted squash to the skillet, add the chestnuts, toss gently, and remove from the heat.