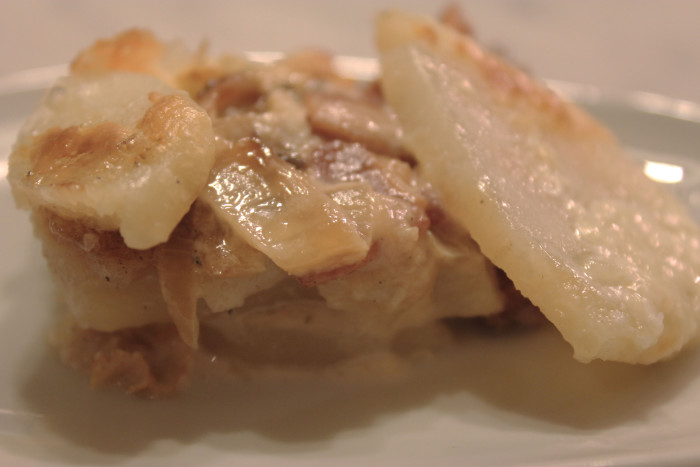 I first posted this last January. It was cold. It is cold again. Comfort food time. Big time. Enjoy.

Author Hillary Davis of French Comfort Food has assembled just the grandest collection of comfort food ideas. This recipe, from the Haute-Savoie Region of the French Alps, is her proposal for wintery nights.

I made this dish and I think wintry nights would be improved with these potatoes on the table. So are autumn and spring. Deep summer? Yes, even then, after the sun goes down. A little of this with a barbequed steak is a summer experience that you want to share.

This dish is rich, blissfully adorned with cream and bacon and cheese. The relative proportions here give you a dish where no one flavor dominates, but all the flavor notes percolate as you enjoy each and every bite. This is a fabulous “one dish” meal. Maybe a side salad if you want a little flavor break. Certainly a cold white wine of distinction, because this dish is distinguished.

Peel garlic, mince 1 clove, and slice the other in half. Rub the halves of garlic all over the inside of the baking dish then liberally grease with either butter or duck fat.

Place the potatoes in the saucepan, cover with j water, bring to a boil, then reduce heat, and cook until a knife can be inserted easily, about 14 minutes. Cool to room temperature then thinly slice.

Heat the olive oil in the large skillet and add the onion and minced garlic. Cook for 10-12 minutes on medium until light golden brown. At the same time, in the other skillet, cook the bacon until crisp. Transfer the bacon, plus 1 tablespoon of bacon fat to the skillet with the onion and mix well to combine.

Layer the cheese slices over the top and bake for 30 minutes. Turn off the oven and allow the casserole to rest for 10 minutes in the oven. Serve with a crisp white wine and green salad.

I also love using Brie cheese for this dish. Buy 2 (8-ounce / 230-g) wheels; gently scrape off the rind then slice both in half horizontally. Place the 4 rounds on top of the casserole before it goes into the oven to bake.

This casserole can be put together several hours ahead and baked just before serving. 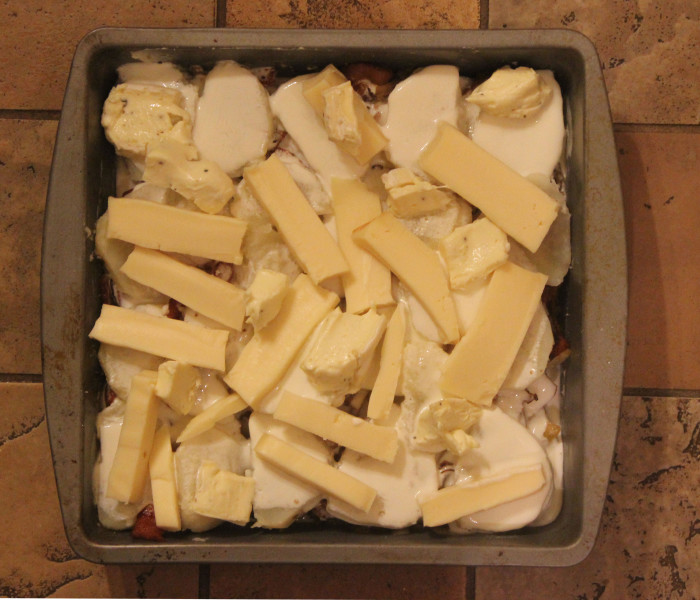