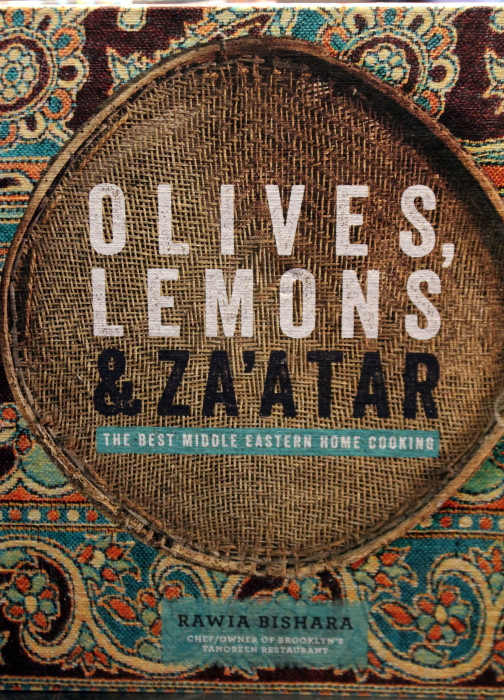 Ok, to begin with za’atar is a Middle Eastern spice mix: dry oregano or thyme is mixed with sumac, toasted sesame seeds and salt and then served with olive oil and flat bread as the signature breakfast dish.

Oh, sumac? That is a spice made from the dried and powdered berries of a shrub that is common in the Middle East. The flavor is often described as lemony. Yes, we have our own varieties of sumac growing in North America. They are strikingly beautiful in the fall: 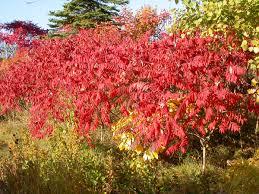 Well, with all that background, that’s almost reason enough for you to buy a wonderful new cookbook: Olives, Lemons, and Za’atar. This post is really a three-fer: book review, restaurant review, and cooking school recommendation. What’s the common denominator: author Raiwa Bishara.

Several months ago Suzen and I were in Collucios, the premier Italian market in Brooklyn. I was hungry so I asked the natural question, “Where should we go from here to eat. Local and great please.”

Now, I expected to be directed to some place with veal, pasta, and endless wine.

“Have you been to Tanoreen?” I was asked.

“Never heard of it,” I admitted. Well, that drew a frown. My status as a foodie was had just been downgraded. A lot.

So the wonderful Collucio people sent us to the premier Middle Eastern restaurant in Brooklyn, no, actually in New York City. Chef Rawia Bishara began as a home cook whose children had friends, friends who kept coming over and over and eating and eating. Rawia was encouraged to open a restaurant, Tanoreen. Going from a home kitchen to a restaurant can be a major transition. Not for Rawia. “I just moved from one kitchen to another,” she smiles. “Everything, everything is the same.”

Suzen and I had a memorable meal that night. Do I remember everything? No, one dish followed another, each surely better than the last. I became confused. And I had this pang of guilt. Middle Eastern food? Well you know about that. Just consider all those food carts and hummus in the deli and …

Middle Eastern food can stand on its own, with any cuisine. Its Mediterranean roots are as deep and dense as Greek, Turkish, Italian, Spanish, or North African. Rich flavors that may be familiar to you, often new ideas that bring a smile in an “ah ha” moment.

Three nights ago, Suzen and I sat in DeGustibus, the 30 year old cooking school in mid-town Manhattan. Located on the 8th floor of Macy’s, DeGustibus benefits from the taste and energy of owner Salvatore Rizzo. He is passionate about food and his guest chefs. At DeGustibus, you sit and watch a chef prepare a full meal, a 2 ½ hour experience. Along the way, as the chef dazzles with each dish, a terrific back kitchen crew prepares a full-sized copy of each dish for you. You cannot leave DeGustibus hungry. Impossible after 5 or 6 dream dishes.

And who were we watching as the guest chef? Rawia Bishara. And why? Because last month she published Olives, Lemons, & Za’atar, her celebration of the spectrum of recipes that distinguish Tanoreen. This is Middle Eastern food elevated to a level you probably not have experienced. But you should. And, because the genesis of this food was Rawia watching her mother in the home kitchen, this is home food, the daily food of a food-loving culture. So, these marvelous dishes are certainly attainable by you.

There are ideas here you probably know about, have surely sampled in you foodie life, “common” dishes like:

Oh, but you don’t know about how Raiwa has perfected these dishes.

Her tabouleh uses far less bulgar than many recipes, less mint too, but far more parsley. Raiwa explains that her variation reflects that  tabouleh, traditionally only prepared and only eaten by women, varies from village to village. Ingredients and proportions are passionately debated.

Her chicken — which she pronounces correctly to be lavish —is prepared with allspice, nutmeg, and cardamom. And it is stuffed, with a combination that includes yet more spices plus chopped lamb or beef, rice, and tomato. You haven’t had chicken like that. You deserve it and, again, this recipe is well within the reach of any of us.

And the hummus. Actually, there are multiple recipes including her mother’s hummus. Raiwa is a lovely women and outwardly so friendly. But I must say that she has the confidence and presence of an empress. What she says, you will do. And Raiwa is adamant about cooking the chickpeas in boiling water until they fall apart. “Maybe two hours,” she waves her arm. “Whatever it takes. It must be soft.”

I’ve eaten hummus. I know hummus. Well, I thought I knew hummus. I have never had anything so soft and charmingly divine in my life. That’s not true: I remember the first time I had the French cheese epoisse. This humus offers the same love at first bite feeling. The status as a wonderful food experience.

Suzen and I are doing hummus this weekend, straight from this important book. We’ll pass along the recipe, but you don’t have to wait for us. Olives, Lemons, & Za’atar is at your bookstore. Don’t hesitate