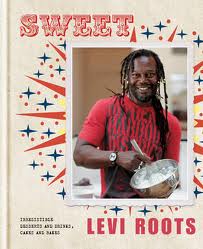 Levi Roots is a man whose background is charmed and has led him to a charming career in the food industry. He’s now a British-based author whose latest book, Sweets, is tantalizing.

Levi grew up in Jamaica, living with his grandparents. At age eleven, he joined his parents in Great Britain. His grandmother taught him to cook, and Great Britain gave him the opportunity to expand. He has appeared on BBC as a guest, then had his own show. And a café and a string of cookbooks.

Sweets shows deep Jamaican roots but tops things off with British polish. For example, a fool is an English dessert, traditionally created by folding pureed stewed fruit [originally gooseberries] into a sweet custard. It’s as English as Shakespeare.

Levi offers up Roast Apple, Rum and Maple Fool. There’s his Jamaican rum plus North American maple syrup and apples from Eve’s tree. It’s a masterful mélange of old and new using the framework of that fool concept that actually first appeared at the time Shakespeare was writing his plays and poems.

Oh, if you like fools, on the facing page is Mango and Mascarpone Fool. Shakespeare never had that one.

There’s a Caribbean flair to many of the recipes here:

When you read these recipes, and salivate over the photos, you begin to notice something. Yes, they are inspired by a climate where it’s 80°F in February, but these are universal recipes, ones you can enjoy year round, no matter the temperature outside.

This book is a delight to page through, testing your will power, and constantly offering you the opportunity to surrender. The only thing you may have to do is go buy some limes, or mangos or passion fruit. You could rake the last fall leaves or barbeque some pineapple and make that lime caramel sauce.

The leaves can wait.