Cookbook Review: The Book of Gin by Richard Barnett 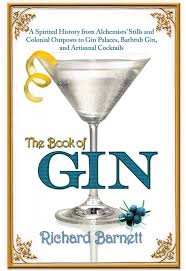 Gin. Suzi’s favorite. And — vodka and rum aside — mine, too. No, actually when she wants a gin and tonic I make one for me, too. And I’m always impressed with that biting freshness. Then, too, there is the Singapore Sling. I’ve been to Singapore. I sat in Raffles and I drank a lot.

Gin is unique and important. After all, what kind of civilization would we have with no martini to end the day? Right there you encounter the complexity: is your martini wet or dry, shaken or stirred? Do you put any Vermouth at all in the glass?

The Book of Gin by Richard Barnett is a tidy history of this wondrous beverage. It’s us Americans who made it into a cocktail, by the way. Before that, gin was drunk “neat” all by itself. Oh perhaps, there was some carbonated water. After all that’s where Mr. Schweppes opened his London factory to make first carbonated and later quinine water. In 1790. After he gave up being an apprenticed German watchmaker.

The history of gin is just that: a history long with names that you know by heart, that you see in the supermarket each week, that you may well buy and take home with you. When did that history first being?

Actually, about 12,000 years ago. As the last ice age ended and the glaciers retreated, evergreen forests spread northward. And in the meadows flanking those forests, there have always been juniper bushes. Those juniper berries are actually fleshy pine cones.

Juniper, in the form of beverage or medicine or both, has been used from ancient Egypt on. First there, then in Mesopotamia. In the Arab empire, wine was evaporated and aqua vita was discovered. That’s a Latin and lovely phrase for alcohol, which comes directly from Arabic.

By the 1200s, alcohol was being made from wine and then proto-gins were being created using juniper barriers and other florals. Today, over 100 different ingredients are used in the many gins available to us. Even a “standard” gin, like Tanqueray, has a dozen flavors in it, not just those berries.

The Middle Ages beverages were really tonics, medicinal and created by monks using secret recipes and the local ingredients all gathered by hand. Who do we owe thanks to for modern gin? Why, it’s Henry VIII of course. Henry got rid of two things: wives and the Catholic Church. No church, no monks. So in England wives replaced the monk and many households had a still. That laid the foundation for producing distilled beverages in quantity and having them available for daily consumption.

While the Dutch actually did the first mass production of gin, using German grains, it was the British who went full bore. And it was in London that gin gained that first notorious reputation for fertilizing massive public drunkenness. Why? London was the largest city in the world. In the country side, the nobility owned the land and saw land values — their wealth — declining. To maintain value, the nobles wanted to grow lots of grain. How to sell it? Gin, not bread. Laws were passed making it expensive to import French brandy and other competitors of gin. The taxes were kept low on gin to inspire a soaring volume of consumption. The city poor could afford to drink. The nobility got their sales. And the British government received enormous revenue from low taxes on big volumes of gin.

That rather tangled situation generated the British temperance movement. From the movement there were born firms offering non-alcoholic alternatives to gin, firms suggesting that tea or coffee or cocoa would be better. Some of those firms, like Cadbury and Twinings, are with us today. And, on the shelves of your neighbor store.

Other names you know are Bols and De Kuypers, which date from the 1500s in The Netherlands, and were early gin firms. The first American gin maker? Fleischmann’s in 1870 in Ohio, with easy access to Midwestern grains.

The Book of Gin is full of history that will make you grin. The web of connections is very intense. Rose’s Lime Juice? It got its start as a solution for scurvy on British sailing ships. Preserved lime juice and gin became a solution to a problem that could wipe out 2/3 of a ship’s crew.

Those medicinal uses for gin are now far less important. Its role as the base for cocktails is the key role gin plays in our lives. While the popularity of gin has soared and dipped, the past two decades has seen an exceptional increase in the availability of small-volume, high-quality gins. Old-fashioned copper stills are back in vogue. Distillers now spend seven hours at a time watching that micro-batch from start to finish, smelling, blending, tasting, and — above all — seeking exceptional flavor.

If you want to spend a lovely evening or two, then Gin is an enchanting read. If you want a superior guide to the best in the current crop of gins, then the tasting appendix at the back of the book is worth the price alone. You’ll find more names, more connections, and great details. How did Prohibition impact gin. What role has it played in literature and film? Gin will tell you.

Next time you have that martini and ask, “How did this marvel happen?” — well, now you know where to find out.