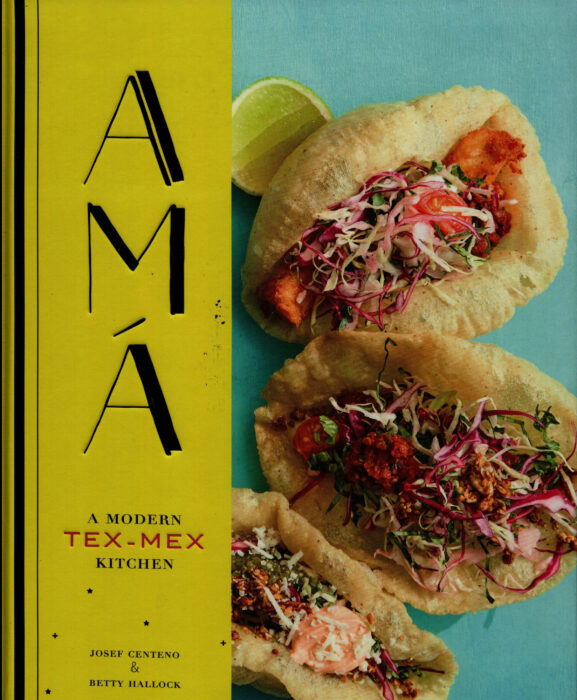 Roots run deep. Chef Josef Centeno grew up in San Antonio, a capital city of Tex-Mex cuisine. He wanted to be a chef, migrated to New York and worked in Michelin three-star restaurants in New York, San Francisco, and Santa Cruz. And ultimately, Tex-Mex drew him back.

Now he has a galaxy of restaurants including Ama located next to an alley off Fourth Street in downtown LA. Traditional Tex-Mex is rancho food: meats, stews, beans, chiles and tortillas by the mound. Criticized as not being “authentic” Centeno says that is exactly the point: Tex-Mex is an indigenous and evolving cuisine that expands and enriches decade by decade.

Seven chapters span the day from breakfast to dessert, plus the pantry:

“Larder” is too simple a word for the clever ideas presented there:

Preserved kumquats with lime and chile

A Tex-Mex Breakfast comes with fruit and chile in abundance:

Ama’s Table is the chapter with the big dishes, ideas filled with heat and color:

The Verduras chapter shows the Tex-Mex respect for veggies and the grand exploration to give them full expression:

Super Bowl is upon us. What better source of ideas than the Super Nacho Hour chapter. There are twenty-seven ideas here from guacamole to that spicy beverage michelada:

Peel-and-eat shrimp with chile and peanuts

That michelada is beer with some “warmish” additions:

And Dulces will let you end your meal with flavors that always amplify the night:

This book is a treasure trove of what it means today to be Tex-Mex. It is a cuisine to be relished and embraced with all the passion and heat of those chile peppers.

Just saying, when you drink the michelada, do have some ice water around. Or maybe a secondary beer. Cold. Ice cold.

Ama is an important book and one you’ll surely cook, and drink from, from over and over again.