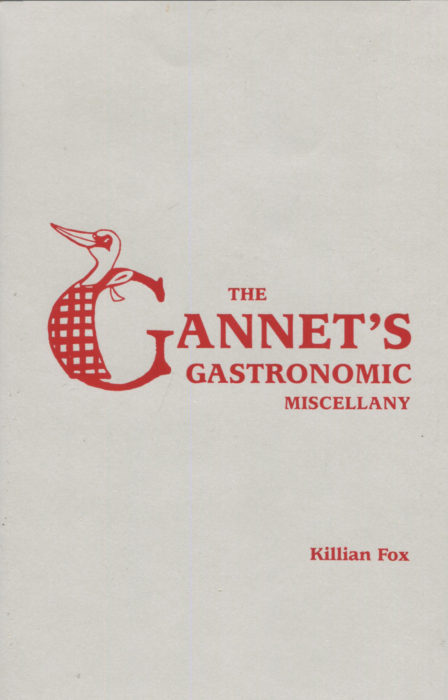 There are two meanings to the word “gannet.” One is a seabird and the other, in Britain, is a greedy person. The only “greed” here is an overwhelming passion for quirky, but still useful knowledge.

A British website, the gannet.com, offers an eclectic mix of recipes, books, and interviews. It is self-described as a “conduit for shameless nosiness about other people’s eating habits.” This book is an assemblage of facts and tidbits and ideas that will enlighten you, puzzle you, and surely have you laughing.

It’s the first book I have ever seen that has no table of contents, no index. After you turn the title page, you step into 200 pages of fun. Facts about food, booze and people.

Ah, people. Arthur Boyt is mentioned. He eats roadkill. And here you have his short assessments of the taste qualities of badger, otter, fox, squirrel, snake and sparrows. I think the squirrel would only qualify as tapas.

What have been the worst kitchen jobs in history? Turnspit is the winner. Little boys crammed into very hot places to slowly turn the meat for hours. To spare the boys, some people trained geese for the job using a treadmill. There is no mention if the geese were then eaten.

There’s a most useful list of the things that should not be kept in the refrigerator and why: tomatoes, bread, bananas, honey, basil and avocados. Sometimes these foods decay, sometimes they pick up other flavors, and sometimes — like onions — they contaminate other foods.

MSG is bad? A single page tells you what MSG is, why it is so delicious, what the reputed problems are, and why it does NOT have to be avoided. In fact, its use and its failure to cause health problems have been noted by David Chang, Heston Blumenthal, and Harold McGee. Shake away!

Since 1943, the BBC Radio 4 program Desert Island Discs has asked people, if sent to a desert island, what luxury item would they take. Over 400 people have given a food item as their luxury choice, but these choices can seem a tad strange:

No one here mentioned Oreos. How bizarre. They need to inverview me.

You can find NASA’s recipe for cornbread, to be eaten in space on Thanksgiving. The “press your palm” test for steak doneness is displayed: with three areas for rare, medium and well done.

If your schedule permits, you can fit in the Annual Golden Spurtle food festival in Scotland. They feature porridge. Or, if you love food markets, you can see a list of the great food markets of the world including La Central Abast in Mexico City [810 acres or about 1.25 square miles]. There is 1000-year-old Borough Market in London, which Suzi and I have visited, and which is the greatest collection of sausage and cheese on earth.

Traveling somewhere and want to take a gift the folks will love? There is a table showing the favorite candy by country. China? It’s Dove chocolate. Globalization is a wonderful thing.

In its 200 pages, The Gannet’s Gastronomic Miscellany is anything but miscellaneous. It’s addictive and most charming.