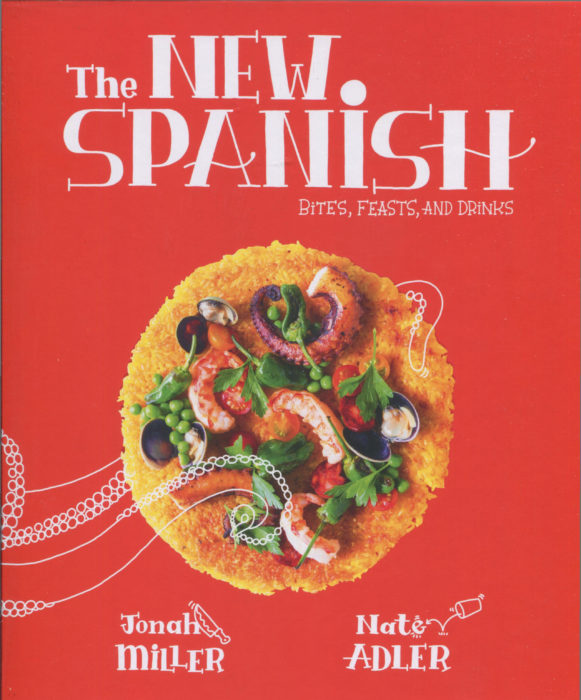 It’s pretty easy to review this book. Buy it. Cook from it. Enjoy it with all the relish that authors Johan Miller and Nate Adler have applied to this superior book.

When I interviewed Jonah today, he explained the odyssey that brought him to this book and his restaurant Huertas. Four years and counting on lower 1st Avenue in Manhattan.

When he was thirteen, Jonah attended a bar mitzvah for his best friend who happened to be a foodie. The friend got a gift: dinner for two at Chanterelle, a most famous Manhattan restaurant. It is doubtful that Chanterelle had entertained two young men for dinner like this before. The boys liked Chanterelle and Chanterelle liked him. For the next two summers, Jonah worked for free in the Chanterelle kitchen, an apprentice in the true culinary French sense of the word. There were many more foodie steps, all grand ones, and now he and his partner have the restaurant and this book. Getting to Huertas was just like getting to Carnegie Hall: practice, practice.

What is “new Spanish.” Well, it is two New York guys who love food and cleverly decided to put a New York spin on Spanish tapas in particular and Spanish dishes in general. There are many reasons, both small dishes and big ones, to open this book, learn, cook, and be quite amazed.

I often say that the first recipe in a book is key. Is it important, compelling, intriguing? Here, the first recipe for Gildas is just that: a skewer outfitted with anchovies, pickled peppers and manzanilla olives. The book opens with a full chapter of skewered foods, pintxos, with a Basque heritage. Here are some examples:

One of those has to appeal to you, has to! And probably all. You can happily live forever from this first chapter, but you would not want to do that. There’s so much you would miss, like:

Pickled Mackerel from a chapter devoted to canned fish [easy dishes, elevated with spices and more]

Tortilla Espanola [no, not those flat Mexican things; a rich omelette of caramelized onion, sliced potatoes, eggs and heavy cream; don’t mention this to your cardiologist]

Duck Croquettes [the most difficult recipe in the book; deep fried; something to visit Huertas to try!]

Oh, those last two things. Nate Adler is the beverage man in this powerful team. At Huertas, they have their homemade vermouth on tap. I tasted it. I’m going back for more and I’m surely going to be making both that beverage and the tonic syrup for G&T on an ethereal plane.

This book is dually seductive. You want to eat this food that seems so “different” — there is this urgency to try it. Which means you are seduced, too, into opening up your pantry and cooking away. This is an awesome book to spend on a Sunday afternoon in your kitchen. Some Spanish wine, a little guitar music in the background.

Or, what a party book this is! Invite friends into your kitchen. Hand out skewers and have ready the olives and anchovies and other basic ingredients for those pintxos delights.

Ah, yes, you will have in advance made some vermouth. Both red and white. And that tonic syrup. It can be a wondrously long and liquid party. Rather like a night in Spain. With just a touch of The New Spanish flavors.