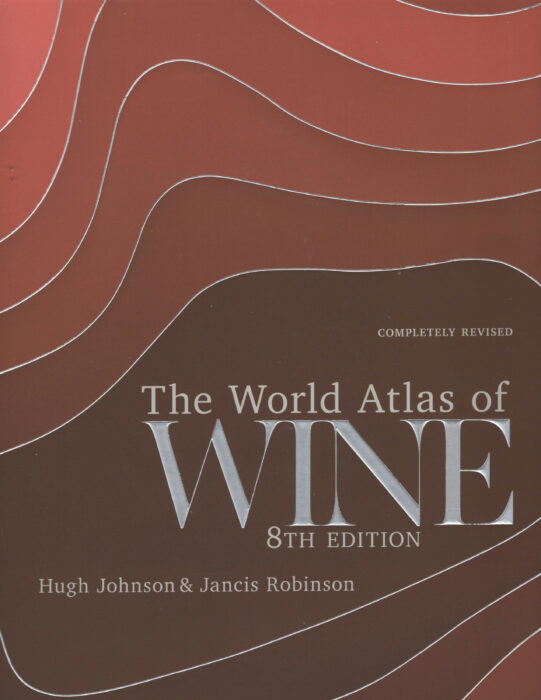 Aging. Now, there’s a word that can stir your emotions. Aging is inevitable. Is it always a downhill journey?

Of course not. We age our wine, for months or years or decades and the wine is all the better if we do it carefully. Even a wine guide can be better with age. Much better. Brilliantly better.

Hugh Johnson took on the monumental task of crafting the first World Atlas of Wine in 1971. Now, forty-eight years later, Hugh and his compatriot Jancis Robinson have given us the 8th Edition of this grand book. The World Atlas of Wine is, as always, a loving tribute to grapes and the luxury they yield to us.

This is an atlas, not a wine guide. So the cardinal feature of this atlas is the assembly of 230 very detailed maps covering wine-growing regions. A map may span a country, a region, an entire valley, a stretch of hillsides on a river, or a few square miles of a California valley. Here’s an example, the Northern Medoc in Bordeaux. As you can see, the atlas details sometimes take you street by street a dense wine district. The purple areas there are the maze of amazing vineyeards: 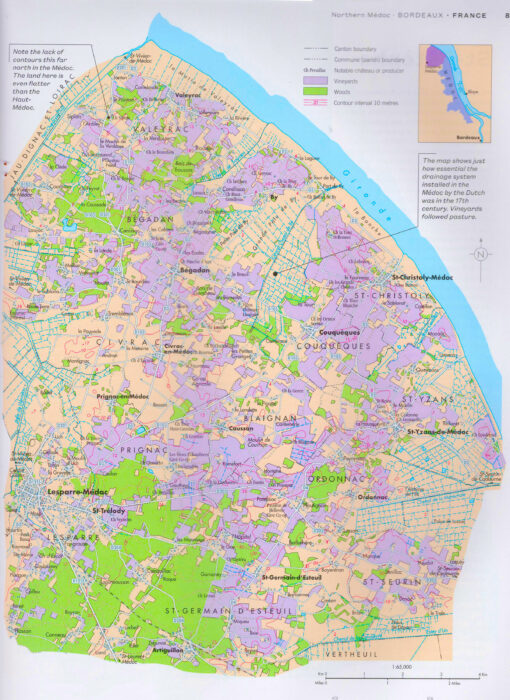 Some maps have elevation contour lines so you can imagine the hills and see how one vineyard follows another to the peak. Terroir means that on that one hill, perhaps with the same grape, one winemaker after another can fashion a distinct and distinctive creation.

The original Atlas was published 48 years ago and certainly was heavily French in its focus. What has changed?

Well, the French focus is still there. The French section is 100 pages, a quarter of the entire book. Is that a holdover phenomenon? No, it’s simply a fact of life that France is the premier location, or locations, for creating wine. You see that in the dozens of maps that show wine grown on hillsides, deep in valleys, the chalk of Champagne. France deserves all this attention and detail.

Yet, there is life beyond Gaul. Italy receives 34 pages, Germany 24, Spain 18, and Portugal 14. The rest of Europe, from Slovakia to Georgia is covered in 40 pages. Don’t worry. Full respect is given to Hungary’s Tokaj [Tokay] region.

North America is surveyed in 38 pages, South America in 11, Australia and New Zealand in 31, South Africa in 6, and Asia in 6. Those relative proportions are probably reflected in the stock on the shelves of your local wine store.

What else is new in this 8th Edition? The photos. All the glorious photos are new and as intense in color as grapes in September. There are new countries added: Cyprus, Lebanon, Israel, British Columbia, Brazil, Uruguay. And sometimes a single little region, St. Helena in California, gets its own spotlight.

British Columbia appears thanks to global warming. Warming has, it is noted, been a boon to Germany where warmer temperatures make for longer growing seasons and more sugar. The updated writing reflects the changes in wine growing and making in each region in the book. The improvements in wine quality are noted — reflecting the impact of science and engineering on the art of winemaking.

Jancis Robinson spent that past two years intensively reworking the 7th Edition. The book has been slightly expanded in page count, but every paragraph seems to have been tuned. In accordance with having all those maps, the book has added nutshell sections for the main regions — introductory sentences if you are in a skimming mood. Info panels give you the essence of terroir, climate and grapes. There are 3-D soil maps so you can understand the impact of soil, not just on the surface, but feet deep. We look at the grapes, we don’t think about the roots.

The end result: this is a most beautiful book reflecting care and consideration. It’s a treasure and the authors simply keep polishing and perfecting.

This is not a book you pick up and read in one end-to-end session. And, at about five pounds, I don’t see me carrying it around as I tour Provence. This is a book to sit down with, dabble with, relish and surely sip a glass as you wander about the globe. Do start in France. It really is the gem in the crown. And this the crown book of all wine guides.