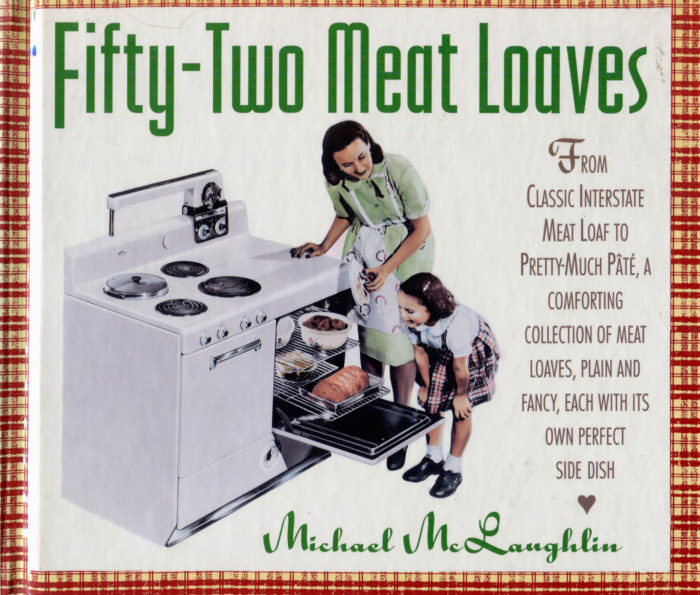 This book is 24 years old. It will be in use forever. It’s brilliant. And quite comforting.

Okay, bad pun. Meatloaf is, surely, one of the top ten comfort foods. If you grew up in the 50s or 60s, you probably had meat loaf once a week. If you grew up not upper middle class, you had some meat and a lot of bread and crackers in the mix. As we grew older, and richer, we had more meat and better bread.

Author Michael McLaughlin was one of the background food writers who made such great contributions to New York, and American, cuisine in the late 90s and 80s. He was born in Colorado but came to the city where he worked with the team at a very small retail store: The Silver Palate. He helped write that best-selling book, opened his own wonderful Village restaurant, the Manhattan Chili Company, and went on to pen a dozen cookbooks.

He died a young man, aged 53, in 2002 in Santa Fe in the heart of the Southwestern region he loved and wrote about with such glee and care.

I know that many people abandon meat loaf when they leave home for college. Others of us insist on meat loaf dinners in the fall, using Mom’s old recipe. And many of us make the make loaf, and do eat it for dinner, but really want that cold meat loaf sandwich the next day on French bread with mayo and pickles. It’s sublime. Actually, even on a warm night, what can beat meat loaf and baked potato served with melting butter and Worcestershire sauce?

Well, Fifty-Two Meat Loaves will not disappoint you at all, whatever your meatloaf preferences. Everything you want is here, and more, so much more. Michael begins the book with his four key considerations for meatloaf: moisture, texture, flavor, doneness. To achieve moisture, I believe he was an early advocate of the now classic meat mix: beef+pork+veal. If you divert and use, say, chicken meat, then Michael instructs you how to compensate for the dryness of other meats.

Texture? Don’t use too much bread and crumbs. Just don’t. Flavor? Ah, the recipes here are resplendent with flavor amplifiers: liquids like ketchup and components like carrots and peppers. And doneness? Treat your meatloaf like you would that Thanksgiving Turkey, with care and a thermometer. Overdone meatloaf is a culinary tragedy. No amount of ketchup can perform a rescue here.

There are 52 meat loaf recipes are divided into clever chapters including:

I sorta avoid those last two chapters to be honest. I’m focused on his repertoire of upscale meat loaf bonanzas like:

Cranberry Glazed Turkey Loaf with a Tunnel of Stuffing

Cuban Picadilo Loaf with Olives and Raisins in a Cornmeal Crust

Pretty Much Pate with Chicken Livers

As a bonus, there’s a suggested side dish for each of the loaves. Some are simple: Buttermilk Mashed Potatoes. And some invite your immediate attention: Rutabaga, Carrot and Shallot Pudding.

Michael was a master of American comfort foods and he had a flair for transforming European classics into American ones, with a little chili twist.

I’m sure you can taste your mother’s meat loaf now. But, there is life beyond mom. Heck, if she’s still alive, bring her one of these treats and watch her smile at the first bite.