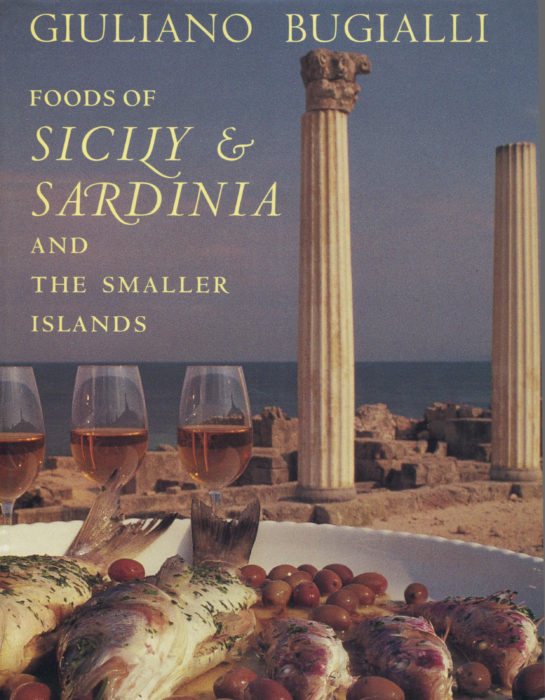 This beautifully photographed book is a culinary tour of a unique part of Italy. Indeed, even today a Sicilian will describe himself as Sicilian, not Italian. And he speaks Sicilian, not Italian. These southern islands have been occupied for thousands of years by waves of very disparate cultures: pre-Rome Italian tribes, Greeks, Carthaginians, Romans, Islamic warriors, the Goths, the Normans, the Byzantines, Islamic warriors, the Spanish and French, … Yes, I probably made an error the order here. Everybody seems to have come to Sicily only to be pushed aside by another force, another era.

Why Sicily? It has always been a rich agricultural area, more in the past at times. Climate changes over the past few thousand years have made the island a gem to possess, sometimes a very rich gem. Those different cultures have left footprints on the island, some of them architectural and many culinary. The culinary history is long, complex and happily portrayed in this book.

Discussion about Sicily often focuses on dividing the island into two or three areas, ones where earlier cultures, like the Greeks on the eastern shore, have dominated. Instead, here the book is arranged in “standard” chapters:

Foods of Sicily and Sardinia was written in 1996 and truly represents a snapshot of this magnificent and distinctive cuisine. While those chapter “names” are the same as you often see, the recipes here reflect a distinctly island heritage:

Pasta Baked in a Squid

Cauliflower with Raisins and Anchovies

Sicily has been both isolated and swamped by incoming waves of new rulers. The peoples of these islands soon learned to be quite self-sufficient in terms of food. The land itself has a very warm climate with much of the islands semi-arid. There is a limited array of what can be grown or caught, so the essence of the cuisine is “to use what we have very well.” Wheat is turned into pasta. Capers and mint come from land. Anchovies from the sea. Those elements are employed again and again in creative, reflective recipes. The food is flavor intense. The recipes, like that Cassata dessert, have been honed for hundreds of years. The classic recipes here are culinary treasures, preserved and honored by the people of these islands. And happily shared in this book