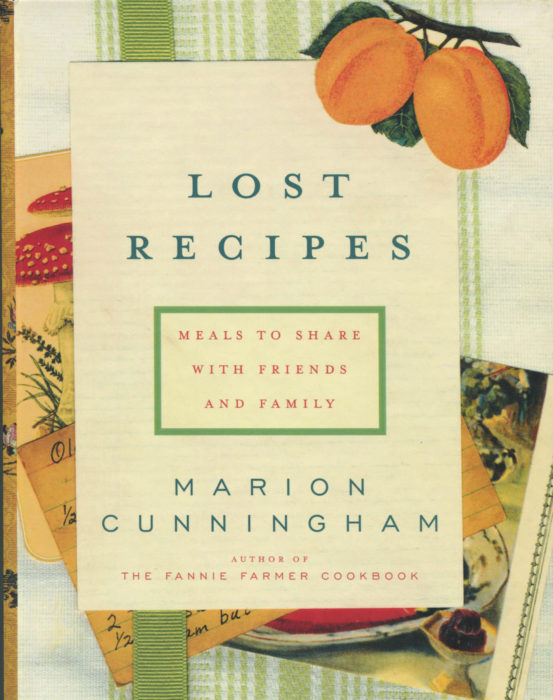 When she died at age 90 in 2012, Marion Cunningham left a culinary legacy that might be matched but that could never be surpassed. A California native, she became an expert in that specific cuisine and support both California chefs and culinary movements for decades. Her greatest contribution was the rewriting, the update, the saving of the Fannie Farmer Cookbook in the 1970s. That classic was as stale as 80-year old bread. Marion brought it back to life and made it a must-have general cookbook for all of us.

In all, Marion wrote or collaborated on eight cookbooks. This one, Lost Recipes, was her last, in 2003 when he had turned 81. We should all be so active and cogent at that point in our lives.

Here, “lost” means no longer used. Marion bemoaned the trend towards simpler dishes or dishes not made at home at all but just brought home from the deli counter. The recipes here are for the home cook in the style she knew as a child and then post-World War 2. Moms stayed home. Moms cooked. Moms knew how to cook.

While these are recipes most moms could make fifty years ago, far fewer could make them now. But these are gems, a battery of recipes that you could depend on and use 7 days a week. This book just could be your “one and only” source of recipes. It has the breadth and depth to sustain you.

There are familiar things here, a simple potato salad and a basic meat loaf. But the pleasure of reading this book is seeing recipes, both simple and complex, that you just haven’t had for a few decades. Or never had at all.

You’ve surely had a wedge salad. There are alternative and one is given here: Wedges of Iceberg with White Cheddar and Chive Dressing. No bacon.

People used to serve relish as a side for most main courses and there is relish in this book, including the famous Fire and Ice, a combo of tomatoes and peppers and spices, that once graced every California tea room table.

We don’t eat rarebit much anymore. Oh, you don’t know what it is? Toast and melted cheese and more. It’s not grilled cheese sandwich at all. Here you’ll find the classic Welsh Rarebit but also a very California tomato one, too.

There is Chicken and Dumpling Soup where the recipe calls for feathery dumplings. Light and easy on the bite. Today, many home cooks make a dumpling that could double as a brick. These are better.

Of course, dessert was always on Marion’s mind. Here you’ll find a Brownstone Front Cake, made with brown sugar, and frosted with Burnt Sugar Icing. That’s a skill that few of us have today but the taste, once sampled, will never be forgotten. And there is the Hoosier Cake, from Oregon, which is delicate chocolate topped with Gravy Frosting. Don’t be concerned, the “gravy” here only means you start with milk. It’s actually sweet and light and would be terrible on mashed potatoes. But on a chocolate cake? Heavenly

Finally, you’ve had cinnamon rolls or sticky buns probably every month of your life. Well, I have. After going through countless recipes, Suzi knows that the recipe here for Sticky Buns using Marion’s Sweet Roll Dough, is simply the best recipe ever. You cannot surpass Marion’s perfected sweet tooth.

And, I guess that is true of most of the recipes here. Simple or complex, they represent the best of American cuisine when we cooked at home and cooked with skill and passion. Marion’s dream was for us to return to that style of cooking. A noble dream and one for you to embrace.

Oh, if you are not a Sticky Bun fan, you can use the same Sweet Roll dough and make Monkey Bread. Surely you must like one or the other. Yes, you can even like both. Marion would be flattered.