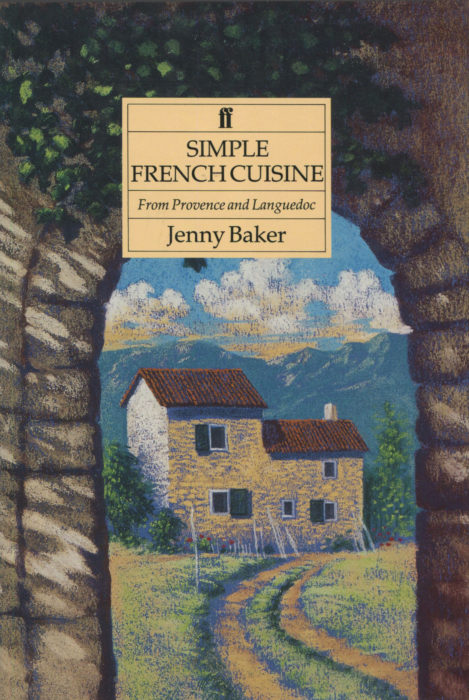 In the late 1980s and through the 1990s, Jenny Baker was a prominent British cookbook author with a half dozen tomes devoted to her dream country, France. Even Diana Henry has written about Simple French Cuisine, calling it a forgotten gem:

These are recipes from the south of France, from Provence and Languedoc. Jenny’s style is to present chapters in an unusual order. You won’t find the normal appetizers-salads-beef…-dessert array here. No, the chapters are based on flavors and ingredients, with the ingredients organized by season. In 1990 we really did cook fresh and local!

In her Flavor Section, there is a chapter for Garlic. Jenny wanted to put down all the ways she had sampled garlic in her years of time in France. So, there are 20 garlic ideas here including:

Garlic Bread [but of course, as Hercule Poirot might say]

In the section devoted to Summer, there is a chapter devoted to Figs and Honey:

Homer’s Cream [crème caramel made with wine, not milk, and sweetened with thick honey

Jenny’s approach to cooking was to begin in her herb and vegetable garden. What do I have today? What is fresh? How can I use it? The chicken or pork almost seem to be afterthoughts, mere vehicles for herbs and veggies to transport you to Pleasure Land.

Diana Henry mentions two of Jenny’s books: this one and Cuisine Grandmere: From Brittany, Normandy, Picardy, and Flanders. Copies of that treasure will cost you almost $200 on Amazon. This book, Simple French Cuisine, is less than $100. I did call the books a treasure for more than culinary reasons.

But both these books are outstanding for their fidelity. The recipes are short and presume you have some cooking skills. Not every step you need to take is necessarily blared out at you. There are no photographs. Your imagination and your experience will have to be your guide. But the journey here is one Jenny would love to share with you. One fig at a time.