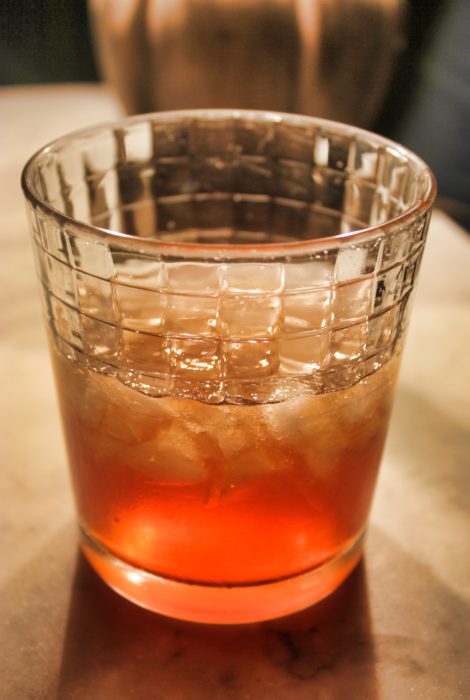 I know, people think of the Whisky Sour as a rather Old Fashioned beverage. Pun intended, thank you.

And the classic recipe can be very simple, starkly simple. On the Crown Royal website, they propose just four ingredients:

For some reason, certain people like that shaken egg white froth on top of their beverage. Not I.

Today’s mixologists follow two parallel paths. On one, they forge new delights for us. On the second, they remix and retune the classics, bringing them to a new level.

This beverage comes from that second path. It’s officially called the L’Enfant from Dave Shenaut at The Raven and Rose in Portland, Oregon. It’s dramatically different.

Look again at that picture, at the color. Do you see it? The color is from Aperol. Which provides sourness in a lovely yet complex Italian way.

And there’s a secret ingredient, Combier Pampelmousse, providing both sour and sweetness in its very particular French way. This is grapefruit liqueur with a restrained bite.

No simple syrup here. None needed. No egg white. None wanted.

In the future, you will want this beverage or need it or both. It’s the perfect cocktail.

Combine all ingredients in mixing glass with ice, shake, then strain into chilled cocktail glass.

If you desire, have glass filled with ice, but do drink quickly enough so that there is no dilution.