A Cookbook Review for You While We Are in Yellowstone: Grill Nation

Suzi and I are on the road. We are in Bozeman, Montana for a couple of days, then driving down to be with our daughter and boyfriend in Yellowstone National Park. Kelly is already in Yellowstone and baiting Suzi by claiming she has seen a moose. Suzi and I have been in pursuit of moose for years. We have traveled all across Maine and never seen one. Suzi is hopeful that Kelly has not scared all the moose [meese?] away.
Since I’m about to traipse through marshland in search of large mammals, I’m going to offer you some cookbook reviews that offer the best in summer cooking. Take a look at these books and get your grill — and your salad bowl — ready.  From 2015 … 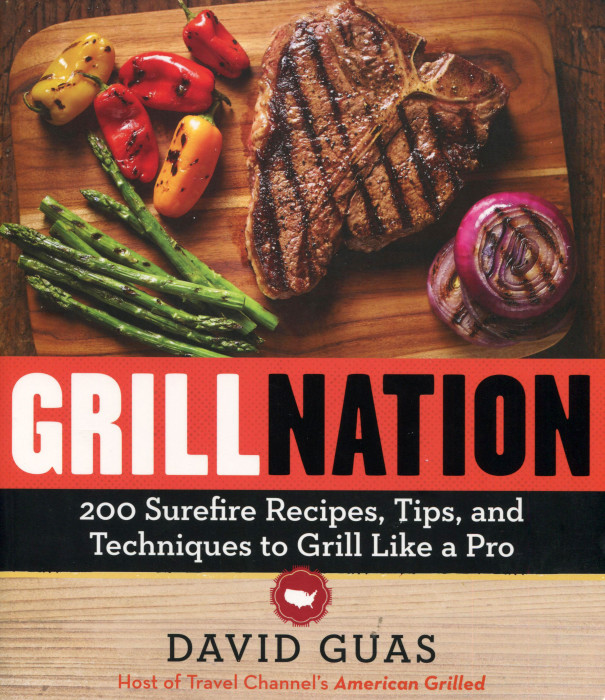 “Would you like tomato barbeque sauce or Carolina vinegar?” the server asked Suzen and me. Suz took the tomato which disturbed me. We were at a wedding in Raleigh and “When in Raleigh” you get the true Carolina barbeque sauce: the vinegar one.

Lucky for me, I did not chide my wife at the time because, technically, I was a little wrong. In Grill Nation, grilling guru David Guas explains that while vinegar barbeque sauce is native to eastern North Carolina, in the western part of the state they do use ketchup or tomato sauce. Raleigh is pretty much in the center of the state, so you could argue for either style.

Suz loved her tomato sauce, but I thought my vinegar sauce was divine. Here is David’s suggested recipe for this classic and quite regional treat:

Whisk all the ingredients in a medium saucepan. Bring to a boil over high heat, stirring until the sugar melts. Cool 30 minutes or to room temperature. Refrigerate in an airtight container and use for up to one week.

David’s new book Grill Nation has arrived just in time. I know, according to the calendar, fall will appear in just two weeks. But, but, if just all keep barbequing outside, we can fend off the cooler weather and then mabe the really cold weather. We just need to man our grills, and David’s bright book gives us plenty of reasons to stand and cook.

You may know David from his show American Grilled on The Travel Channel. Or you may just get to know him by trying out this richly packed cookbook.

Barbeque is often characterized by being fast, not fancy, not complicated. Ah, I know, barbeque sauces can have 40 ingredients and take hours to make. Those sauces and rubs aside, barbeque is often quick and simple. How then, can you make a grilled meal distinctive, something that makes you pause at the first bite and ask, “How was this made?”

David’s method is to add flavor layers, in marinades or on the side. He loves bourbon and peaches and those flavors — plus citrus and sweet — do appear in his recipes.

You can adorn the side of your plate with Charred Jalapeno-Honey Butter. Try the Chipotle-Orange Chicken Legs or the Beef Ribs with Sorghum Glaze. Would you like something upscale? How about Grilled Bourbon-Cranberry Turkey Tenderloin or Grilled Ribeye Steak with Béarnaise Butter and Onion Relish. Seafood on your mind? There’s Grilled Grouper with Cucumber Watermelon Salsa. As you eat away, licking your fingers, you can enjoy a crisp Cucumber Gin and Tonic.

For dessert, David does have summery ideas that are made in the oven, but he lets you stay by grill if you prefer. There’s a Grilled Plum Crostata with Port Glaze and a Grilled Pound Cake with Rum-Scented Grilled Pineapple.

Grill Nation is both happily traditional and cleverly elevating. Traditional in the sense that the recipes tend to be quickly prepared with a relative handful of ingredients. Elevating in the sense that intense, complementary flavors are achieved in the sauces, marinades and sides that David puts on your plate.

As your barbeque season extends, as the leaves turn to gold, you can gold on your grill in the recipes here in Grill Nation.