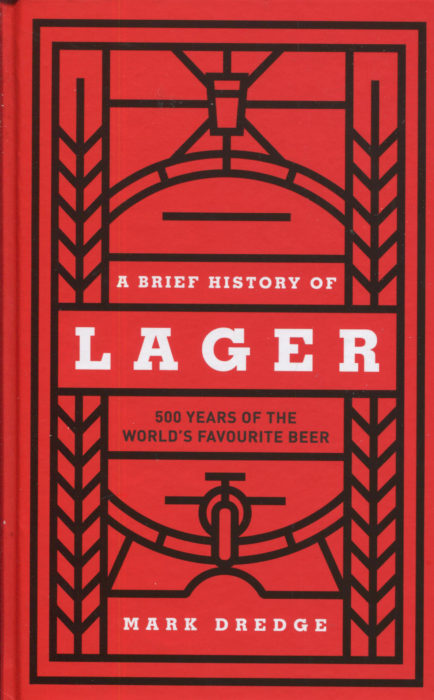 Lager. That’s beer. But what kind of beer? I’m not a beer expert and, while I have heard the terms, my embarrassment rises now. I should know this. I don’t.

Enter Mark Dredge: prominent beer expert and beer author. Mark offers simple clarification and lots of detail in this very specific book. The world family of beers has three branches: lagers, ales, and sours. For most of the 10,000 years man has been making beer, it has been ale. Then, about 500 years ago in South Central Germany, the brewmasters decided to store their beer to let it age before consumption. “Lager” means to store in Germany and that storage occurred in mountain caves, or cellars, that were mountain cool.

Today lager is defined as being beer conditioned at low temperatures. The lagers can be pale or amber or dark. You’ve seen many a lager and probably consumed some: Molson Canadian, Miller, Stella Artois, Becks, Corona, Tsingtao, Singha, Heineken, Foster’s, and Birra Moretti.

Good heavens, I’ve drunk all of those. I have and I love them. Particularly if I am in an Asian restaurant, Japanese or Chinese or Indian, I’m drinking a lager. I bet you do, too

In five chapters, Mark tells the tale of lager: past, present and future:

Chapter One: The Birth of Lager

Chapter Two: The Great Grandfathers of Lager, or How Lager Became the Drink We Know Today

Chapter Three: How America Super-Sized Lage and Turned It from Dark to Lite

The role of America, and its German immigrants, is central to this entire story. In the 19th century, and before, water purity was often poor. In the cities in particular, people turned to alcoholic beverages. As Germans began a mass migration in the 1800s into this country, they brought their love of beer and their lager expertise. Beer halls flourished. And, as the Industrial Revolution, reshaped this country, the brewing industry embraced technology in all its glory. Brewing grew from small scale to industrial scale.

That technology included elements like refrigerated railroad cars. Beer had been brewed and consumed locally. Transporting beer over long distances was something that no one had mastered — making bottles that would survive a journey was a problem. Once massive production and distribution were mastered, a generation of Beer Barons made beer brewing one of the major American industries. Americans brewed on a massive scale for our exploding population. And the evolving American style of lager became the de facto standard for what “lager” means.

Yes, beer production and consumption went wild in the USA. But we are relative pikers in today’s world market. In 1900, 79% of the world’s beer was European. By 2017, that European contribution was down to 27%. Central and South America [notably Mexico] make 19% while the United States and Canada make 13%. 33% of the world’s beer is made in Asia. Taste some of that Tsingtao or Kingfisher and you’ll understand how impressive that production is.

The story of beer, the particular story of lager, is truly interesting, woven tightly into our social history. The tale flows in A Brief History of Lager just like a great lager should: smooth and full of taste.