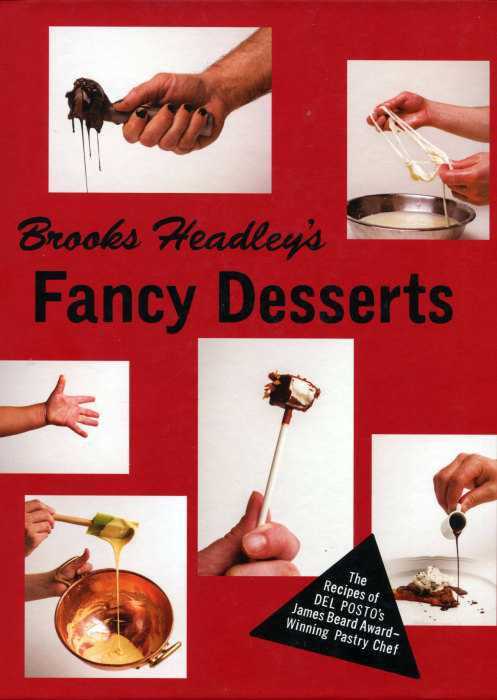 I have about 1600 posts on this blog. Something near 2 million words. I have written about this and about that. I can write about anything. Or so I thought.

I mean this as a compliment to the author and packagers of this book: this is the strangest dessert book I have ever seen. I am a few decades out of my 30s now. Author Brooks Headley just entered his. He has the most complex, fractal-like way of presenting food ideas that I have ever seen. Reading Fancy Desserts, you are going to be dazzled by the recipes, stunned by the ingredient combinations, and probably puzzled by some of the content here.

This is a both cookbook and compendium of philosophy by Brooks and friends of his generation. So, just before the sugary recipe for rhubarb jam, you can find a three page essay by one friend about “Where Punks Ate in New York City in the Eighties.” It’s a story about a noir downtown that is long gone, and there isn’t anything here about dessert.

Brook’s brain is a tumble with all sorts of ideas weaving consciously and subconsciously. He was a lit major in college, he’s formed and participated in bands, he’s toured, he’s probably suffered at times, and he’s formed very firm opinions about the people and the things he sees in the urban landscape. He loves the farmers market at the Ferry Building in San Francisco, and I share his amazement at the sublime Frog Hollow Nectarines available for just a few weeks a year. He calls the Union Square Market in New York City joyless and he hates it. And, you know, the man is right. It’s a movie set piled on top of concrete.

Brooks is the mighty pastry chef at Del Posto, the upscale Italian restaurant that is the gem in Marios’s restaurant empire. The food at Del Posto is Italian, but enormous in concept and execution. Take Parisian complexity and finesse, marry it with pasta and meat and vegetables, and you have the Del Posto menu.

By the time you get to dessert at Del Posto, you will be well fed and rather getting used to the exceptional. It would take a pastry chef of succulent skill and creativity to make the meal’s end as joyful as the begging and middle.

So a pastry chef of many lives, and firm convictions, and perhaps a mind that I’ll never understand is demanded. That man surely is Brooks for the desserts are oh-so grand and oh-so very different. Here you will dessert ideas that are ring out as “How can that be.” Have you ever heard of Celery Sorbet or Eggplant with Chocolate? There are more:

I said Brooks was opinionated. Intense. I gather that he does not like crust on his croutons. Because in his recipe, you slice open a loaf of bread like dead pig, spread the halves apart, and rip the inner bread out in crouton sized chunks. I never thought of croutons as visceral, but …

And with Brooks in the kitchen, the one thing you would never do is peel a peach or a nectarine. For his slow roasted fruit, he wants the full flavor and he knows the flavor is in that most valuable skin.

From his personal awards and the praise for Del Posto, you know that the desserts are rightly famed. You may have heard about his famous Celery Sorbet, but how on earth would you, could you ever make it?

With humor and passion, Brooks presents almost 100 of his trademark recipes dishes in Fancy Desserts. Reading this book, and following its recipes, will be a journey unlike any you have taken. It’s a path you do want to explore.

I’m leaving now. I have to buy some celery. There is sorbet to make. Oh, I’ll probably get cashews, too. For gelato. Chocolate be damned.

Want to send a holiday present someone will always remember? Always. Send this book.