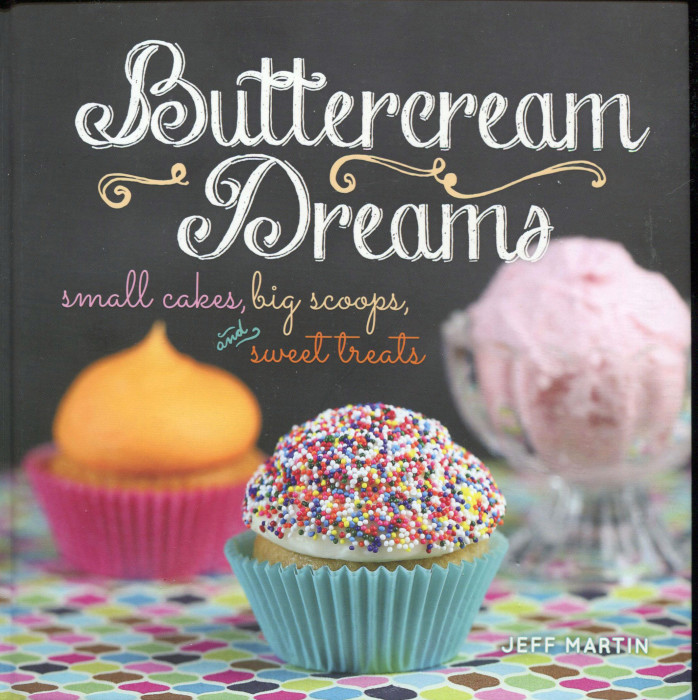 Author Jeff Martin has been in food all his life. He credits his grandmother with a graceful shove in his career direction. He noticed the rise of cupcake stores, felt he could do better and a half dozen years ago founded his first Smallcakes cupcake store. Today, there are 90 franchised stores in 19 states. The stores are growing, and the cupcakes are selling by the thousands.

Oh, it’s called Smallcakes because that is the nickname for his daughter. Do not worry. All the cupcakes in this book are full-scale, full-sized, and full-flavored dessert creations. That word, creations, is important to use here because, as you will see, the cupcakes are wonderfully playful and inspired. Here are some of the cupcake recipes you can bake and savor:

Jeff is doubly famous for that last one, for he made it on TV’s Cupcake Wars and won. But, he forgot to include the pumpkin in the cupcake will all that on-screen, camera-in-your-face madness. He still won! And the recipe, replete with cardamom buttercream, is here for you.

The recipe titles form an irresistible list. French Toast and Bacon? Bubble Gum? To heck with plain old vanilla or chocolate, I just want to know how that bacon is going to marry with the maple buttercream.

These are not your standard cupcakes. With all awards he has won and the striking growth of the Smallcakes chain, you can be very confident that if you make one of these goodies, you will have frosting on top of the smile on your face.

I do have the Orange Creamsicle recipe from the publisher, and I will post that recipe tomorrow. Just in time for your weekend baking.

But, but wait. There’s more. Yes, more. The cupcakes are the first chapter. The next chapter, Big Scoops, is ice cream with again a bounty of new ideas:

I know, you see Salted Caramel popping up everywhere but Jeff is wonderfully authentic: no canned caramel sauce or dolce de leche substitute; you make real caramel from scratch here. And the salt is applied with delicacy, just a ½ teaspoon of flaky sea salt.

Spiced Apple-Pear Pies in a Jar

If you hadn’t noticed before, Jeff is a texture chef. There is crunch and crinkle and snap everywhere in this book. Bacon, caramel, cornflakes are among the ingredients woven into these sweet creations.