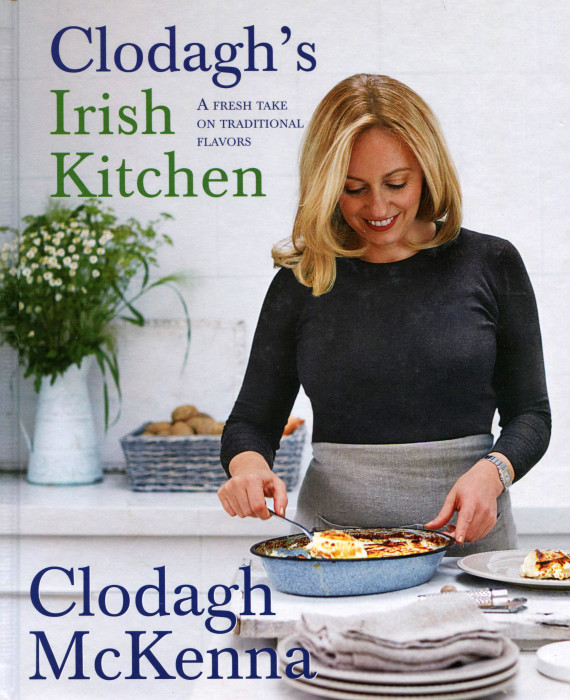 Clodagh McKenna is an Irish food maven. She has studied under Darina Allen, written five books, appears regularly on TV in Europe and the United States, and, to boot, has two restaurants in Ireland. She is a busy culinary expert with a passion for food, both the traditional and the new.

And not just Irish food. While the recipes here often have an Irish base, there are international extensions everywhere. Simple Potato Dumplings are accelerated with a Spicy Cashel Blue Sauce. The standard Irish Breakfast is given a Tortilla lift. The Whole Poached Salmon is served with Pistachio Yogurt.

Ireland is gaining fame for its continuing culinary explosion. In Dublin, over 1250 new restaurants appeared in 2013-2014. The number of farmers markets in the country has nearly doubled in the past decade. With its fish-filled rivers and the seacoast always just a stone’s throw away, seafood is a staple. With rich soil and very abundant rain, produce abounds. Clodagh seizes the advantage with the bounty of shore and field.

In a break with other books, Clodagh divides her chapters between weekend and weekday, between midweek suppers and Sunday lunch. Here are the key chapters and the recipe ideas that await you in Clodagh’s Irish Kitchen.

Good Morning Ireland proves that just because it is morning, we can still enjoy something very personal, very special before dashing off to work and school:

Irish Breakfast Tortilla [I told you this was coming; it’s Mexico City in Dublin!]

Cinnamon Baked Beans [yes, for breakfast; this is Ireland]

Midweek Suppers is devoted to those nights where we have deep food desires and less time and energy than we think we have to pull off a dining spectacular:

An Irish Dinner Party is a mélange of recipes that promise sophistication along with flavor. Try these for your next dinner party and you will be rewarded with acclaim:

Sunday Lunch is something that once was a tradition here in America, the meal of the week for immigrant families. In Ireland, the tradition is unbroken with specialties like:

The Sweetest Thing is devoted to the most important part of our meals: the ending known as dessert. Here you will find:

About that last recipe. Irish kitchens often have leftover soda bread. Make the bread into crumbs, mix with brown sugar, and bake. Take those brown gems and add to a vanilla ice cream base, complete with a healthy dose of Baileys Irish Cream. It is doable and surely delicious.

Clodagh’s experience shines in this book. The hardest job in the world is staring a restaurant, and then having it succeed. It takes hours and hours of work to ensure there is quality in the food and service. And the food must compete with all those new restaurants popping up, some just down your street. That pressure, that sense of competition, can bring out the best in someone. It has in Clodagh whose recipes reflect her passion to combine tradition with a touch of the avant garde. In Clodagh’s Irish Kitchen you will find true Irish food, but food that often has a leading edge and is destined to become the new traditions.