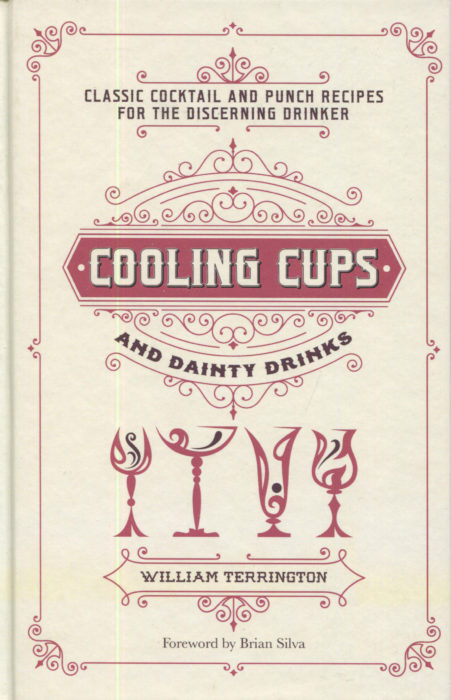 Suzi and I spend about five hours a week in our commute from Manhattan to our weekend house in the Catskills. There is often back traffic and we used soothe ourselves by listening to radio, especially the satellite channel devoted to old time radio. We are mystery fans and love the radio shows from the 30s and 40s.

But then we got hooked on recorded mystery books from Audible. There is a 20 book series by Kerry Greenwood devoted to an Australian sloth: Phryne Fisher. Rich, independent and clever, Phyrne leads an interesting life in the 1920s. She has a large house and a good staff including a cook and butler.

Now the butler is an expert in making cocktails and cocktails were in a golden age in the 1920s. In one volume, we learn how the butler did it. He has a cocktail guide: Cooling Cups and Dainty Drinks or Classic Cocktail and Punch Recipes for the Discerning Drinker.

It’s a real book written in 1869 by one William Terrington. It’s a hoot. In the book, Phyrne is treated to a Cider Cup a la Ensor:

Yes, you need a dictionary to understand this. The balm and borage are herbs and you can find modern substitutes. You macerate the herbs in the sherry — a gill is half a cup. Strain, then add the cider and sugar to taste. Serve with soda water to taste.

This is an example of a “wine cup” and there are almost 100 other ones in the book. Most of them quite surely antiques but still intriguing. The next time I am exhausted, I think I might try the Excellent Egg-Flip:

You just mix it all up and drink it down. Yes, if you google, you will find recipes for cinnamon water.

And there’s are over 50 punches in this volume, include Regent’s Punch:

The directions? Mix and enjoy. I’ve never considered having champagne and green tea in the same glass. But who knows?

I am posting this on the Friday of a long Labor Day weekend. I’ll be shopping tomorrow for ingredients and trying a wine cup or two and surely a punch. Perhaps I’ll even try the green tea.

This is a cocktail book from a very, very, very different age. Give it a try. I am.

Oh, the gill? Not commonly used as a measure in Great Britain anymore. But in Ireland a quarter gill [35.5 ml] is the standard measure in pubs and bars. Some ideas never fully die.