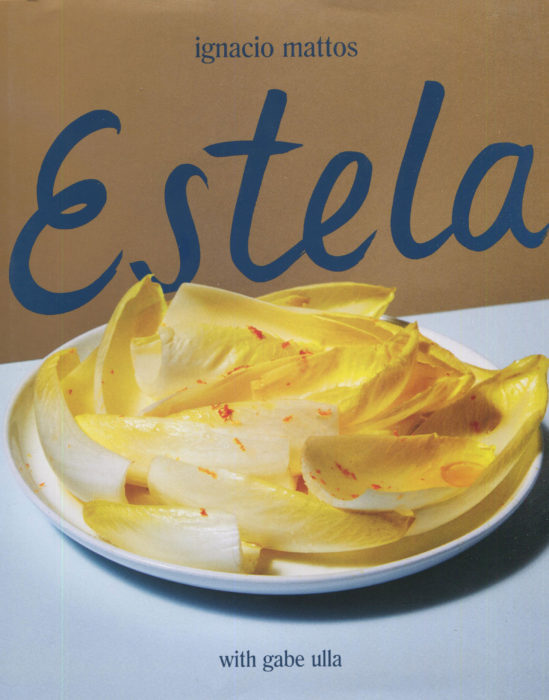 Chef Ignacio Mattos grew up in Uruguay, a nation of just three million people, but with many immigrants from Spain, Portugal, and Italy. He was part of a large family that found life centered around the table. It was natural for him to go to culinary school then work in fine restaurants in his homeland. But the allure of the United States is powerful. His talents more so. He found himself in San Francisco at Zuni Café and Chez Panisse. Then in New York at Il Buco on Bond Street.

He took a dip a few blocks south to Houston Street to find the spot for his own restaurant Estella where all his skills are on display. Those skills include incredible imagination for combinations that are far, far from common [unless you are from Uruguay or perhaps Portugal]:

Boston Mackerel with Grapes and Lardo

Quail with Mashed Squash and Brown Butter on Toast

Octopus with Potatoes and Pimento

You’ll find traces of influences here from the great experimental restaurants of Spain, ingredients from Italy and Spain, and a passion for seafood.

Don’t be fooled: his “toast” is crafted with care, sliced miche coated with olive oil, cooked in a cast-iron skillet, then rubbed with garlic. His preferences for spices and vegetables are dramatic. The results are impressive. He makes simple Egg Salad into a world-class dish using homemade aioli, sherry and chardonnay vinegars, and shaved air-dried tuna.

Any chef has his preferences. Ignacio does not like lamb chops but lamb ribs? His two-day process requires brining overnight, covering with a layer of spices [coriander, fennel, cumin, peppercorns, chili flakes and cinnamon], refrigerating again for hours, cooking on low heat for over two hours, and serving with a chermoula of cilantro, vinegar, fish sauce, and olive oil. Oh, just before removing the ribs from the oven, you brush them with a combination of honey and olive oil.

This dish is as complicated as a medieval cathedral. And as grand.

Estella is filled with cathedrals, churches, and chapels. But each dish will give you an ethereal experience.

Most dishes here are not as complicated as the ribs. But they do have little steps and surprises to generate unexpected flavor bursts. That is the genius of Ignacio Mattos and Estella.

Oh, that cover picture? The book was published late last year and you may well have seen it on display in stores. That cover is curious, striking, but curious. What can it be? Those are endives on top, dressed with orange juice and vinegar. Underneath, out of sight, is a layer of granola made from sourdough, walnuts, cheese, and anchovy. It’s classic Estella.