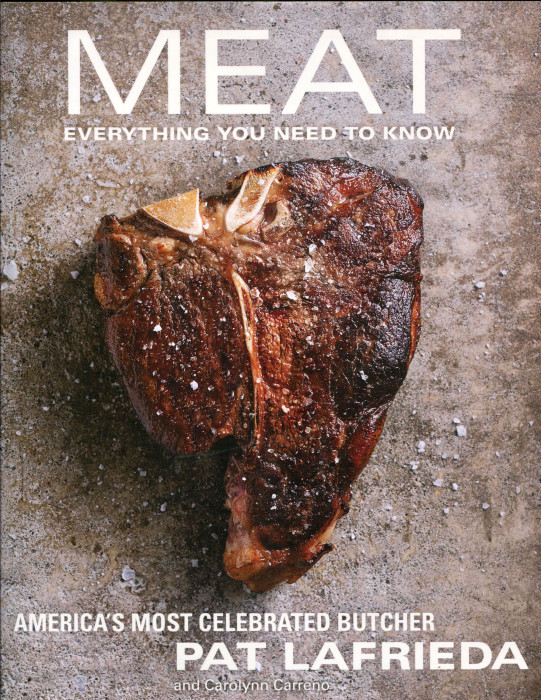 Pat LaFreida may be the most famous butcher in America. His book cover actually calls him the “most celebrated.” Famous or celebrated, Pat is without doubt mightily accomplished. He has led the transformation of his family business and now, with Meat, he’s given us an important, insightful, and at times intense survey of the food type that is central to American cuisine.

To make it very clear, over the past few years we have seen a number of fine cookbooks devote to meat. Pat’s Meat is unsurpassed and truly sets the standard for a book that offers both recipes and education.

No fish here, just four-footed and winged creatures appear. But that leaves plenty of territory to cover. Meat has a key subtitle: Everything You Need to Know. The book lives up to that claim with every page, every recipe, every chapter.

Today, in lower Manhattan, the thing to see is the High Line, the old elevated railroad line that has been converted to an exceptional park. When you walk it now, it’s like walking through a subway car, filled with people you have to take care to dodge. Go early in the morning and you can have some of the privacy a “park” was intended for. And, you will occasionally hear people say “meatpacking district” as they point to an upscale restaurant two stories down on street level.

Newcomers don’t know that the meatpacking district, now a focal point for these restaurants and fashion shops, was until a few years ago a 44 acre maze of interconnected buildings where 250 meat purveyors took in raw product, prepared the meats, and shipped throughout the city and beyond. Suzen and I often used to walk through those blocks, curious about the activity, and in the winter saw men standing on the loading platforms and warming themselves using fires in barrels fueled by chicken scraps, the fat and skin that had first fallen to the floor. Today, the loading docks are either gone or offer racks of designer dresses on sale.

Pat’s father actually used to climb up to that elevated railway, when it was a railway and not a park, a railway that snaked through the buildings of the West Village and Chelsea. The father would go into a parked railway car, buy a carcass, sling it over his shoulder and take it down to the LaFrieda space down in the maze. LaFrieda meets started in Brooklyn in 1922, migrated to the meat packing district, and then to a 1,500 square foot store at 10th and Bleeker. That store had about 20 restaurant customers in the city. Since 1994, Pat has spurred a bit of growth: now 35,000 square feet in New Jersey with shipments to 1,200 customers across the United States.

Pat’s dad, the man carrying carcasses across his shoulder, wanted Pat to have another life. So Pat was premed, and then finance. He worked for a stock brokerage company, hated it, and came home to take over the business. Meat is in his blood, his genes. It’s his passion and that passion is revealed in this wonderful book.

Meat is divided into six chapters:

Each chapter comes in four parts:

Remember that subtitle? Everything You Need to Know? This book layout is designed for that educational purpose. There are more pages devoted to the “about” than to recipes. If you want to understand meat, to finally be able to recognize the different cuts and distinguish them in the market, then all this information is indispensable. And understandable. You may have seen a chart of beef cuts, but still been mystified. Use Pat’s dozen pages of pictures and detailed text, and you’ll be a beef maven.

The recipes? What would you expect of an Italian-American family in the meat business? These are not recipes from Paris. These are recipes from grandmas in Brooklyn:

Meat is a treasure for those of us, most of us, who dabble in protein. Suzen and I cooked from this book the first weekend we had it. What did we cook? Roast, steak, duck? Good heavens, no. It’s easy to know where to start. Look for tomorrow’s post on the Four-Meat Meatloaf. Simply the best meatloaf, and surely the prettiest, we’ve ever had.

The man knows about meat.