Cookbook Review: Preserving by the Pint by Marisa McClellan 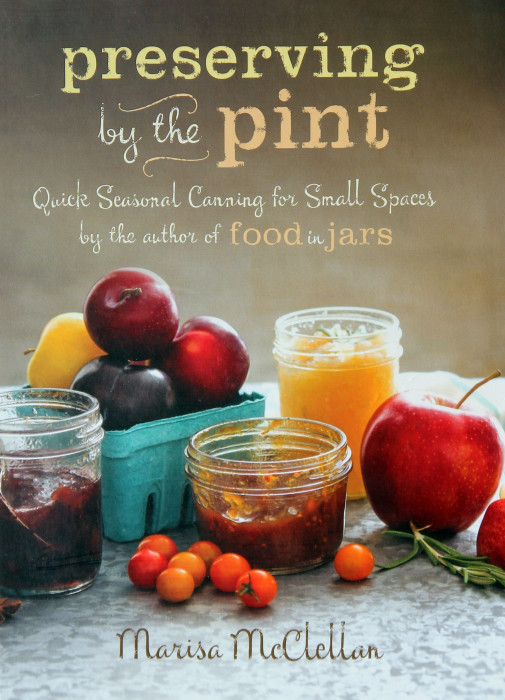 When I was growing up we did canning and preserving. Canning meant pickles. “Preserving” was word rarely used. We “made jam.” Strawberry jam. Sometimes it was exotic: we added rhubarb. Sometimes we even made raspberry jam. And the pickles, well, maybe there was a sprig of dill added and a tablespoon from a box labeled “pickling spices.” Sophistication was lacking.

In the past few decades, there has been the rise of the mighty “fresh and local” movement. “Seasonal” has become a byword. And, for a while, “seasonal” seemed to be in conflict with those “canning” and “preserving” words. But lately, there has been a steady pouring of books devoted to the art, yes the art, of preserving food, and a recognition that when well done, preserved food is satisfying, delicious, and even important.

The new books in the last few years included:

I actually have all three and I’ve posted a review about The Gentle Art of Preserving, a good review. I’ll dig up those other two and talk about those as soon as I can.

But today I want to talk about a new star book: Preserving by the Pint by Marisa McClellan. Marisa wrote the bestselling Food in Jars books and now continues her progression of teaching us all the merits of “putting up” food.

Marisa has been preserving for years, but began to notice there was an abundance of “too’s”:

She’d make jam, go to put it away and discover that she had yet to finish last year’s batch. Making jam from flats of berries rendered her kitchen sticky from floor to ceiling. And simple recipes could, it seems, become boring.

There had to be more to jam. And more beyond jam.

And, lastly, in line with the “seasonal” movement, there had to be recognition that preserving was not a spring-summer activity but one that could and should last year round. There’s always something freshly available that can be preserved for year round enjoyment.

So this book divides the year into seasons and presents recipes that are seasonally sensitive. As you’ll see from the samples below, these are far, far from the standard recipes. The combinations of ingredients here reflect Marisa’s own creativity but also her research into classic combinations here. The origins of many of these recipes are centuries old and far away in European gardens. Yes, we have the “new” habanero being combine with berries but also classic lavender and rosemary ideas. These recipes thus become a template: you can make them as they stand or employ your own imagination and personal preferences. Mixing and matching herbs, as well as changing proportions, will give you distinctive results. By the season, here are some sample ideas:

The recipes in Preserving by the Pint are, of course, designed for small batch production. In fact, the book’s subtitle is Quick Seasonal Canning for Small Spaces. So, if you are short on time or space, this book is perfect for you.

Everybody eats. But we do not have to be regulated to the terribly limited variety of our market shelves. Even my Whole Foods cannot afford the space to offer Caramelized Shallot Jam. But Suzi and I can quickly make up our own batch, and perhaps amend it with herbal notes of our own. If there is a habanero in the house, Suzen will use it.

And that is surely the point of this lovely book: seize not just the moment but the season. Make combinations. Experiment. Savor. And, because you’ve only done it one pint at time, there’s next week to experiment again, learn again, and surely enjoy endlessly.

If you’ve never canned, never preserved, never overcome that reluctance, then Preserving by the Pint is the easy and so tasty way to change everything.