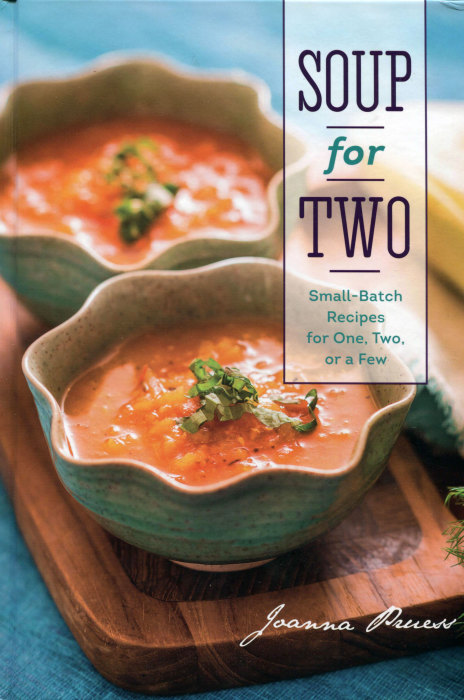 Soup. What does that word summon when you hear it? Visions of red and white cans, maybe blue ones? Bowls of something very watery served in your grade school cafeteria on a “bad food day?”

I have fonder soup memories. In the 1970’s there was a soup and salad chain, Salamgundi’s, in California that had lunch lines out the door. There would be five special soups of the day and I learned that fresh soup, a small salad, one piece of bread and sweet butter could make a meal that was unsurpassed. The key, of course, was the soup. Not from the can, but crafted from ingredients that same day and fresh from the stove — or perhaps from the refrigerator for my new friend named Gazpacho.

For her 14th book, prolific and acknowledged expert Joanna Pruess has turned to soup with this book that will revitalize your soup impressions. Or, if you had a Salamdundi’s in your life, Soup for Two will bring you visions of soup wonders you may have feared forever lost.

Joanna has assembled a mountain of recipes in this book, using her own ideas, family, friends, and lovely ideas selected from her journeys around the world. Soup can, and really should be, a central element in our diets. Soup can provide excellent nutrition with little cost in calories or carbs. The trick, of course, is to find the recipes that provide you with “real” soup, not just can contents.

There is one little issue. Thing is, many soup recipes will give soup for 6 or 10 or 20. That’s a lot to make and store and heaven knows you just might never get to the leftovers in the back of the fridge. So here is the the strong twist that Joanna provides. This is not just a soup book, it is literally a Soup for Two book.

With Soup for Two, you can sample excellence quickly: most of these recipes can be prepared in an hour or less. The quantity is intended for one, two, or perhaps a few. You won’t have gallons of leftovers to worry about. And, as they once said in a certain movie, tomorrow is another day. Tomorrow you can return to Soup for Two to craft another batch of another exceptional recipe.

Chapters are devoted a half dozen key soup styles:

No matter your preferences, or today’s whim, or today’s weather, somewhere in Soup for Two you’ll find a gem you want for an exceptional lunch or dinner.

Can I prove that? Sure. Just read this list I made from Soup for Two. These are soups that Suzen and I hope to try in the coming months, some now and some when the temperature is far about its current 18˚F. Here is food that is both comforting and exciting:

See? You did not breeze through that list, did you? Along the way, your brain and stomach communicated and you took a pause to consider what might be in your bowl tonight. Finish Jerusalem Artichoke Soup? What can that be? You know what Salmon and Corn Chowder is, of course, and you can almost smell the fragrances of salmon and corn swirling about in your kitchen.

There are mysteries in that list of recipes. Circassian Chicken Soup? It from Turkey and here Joanna has applied her expertise to transform a centuries old recipe. Meatballs of chicken and walnut are cooked in a broth of chicken stock amplified with carrots, celery, paprika, parsley and garlic. It’s a simple, yet brilliant recipe. It’s not just a “soup.” It’s a centerpiece. It’s a meal unto itself.

That is the ultimate message of Soup for Two: soup is much more than just “soup.” Soup can be a feast providing that comforting satisfaction we all long for in every meal. In Soup for Two, Joanna gives you the roadmap to satisfaction, one glorious bowl at a time.