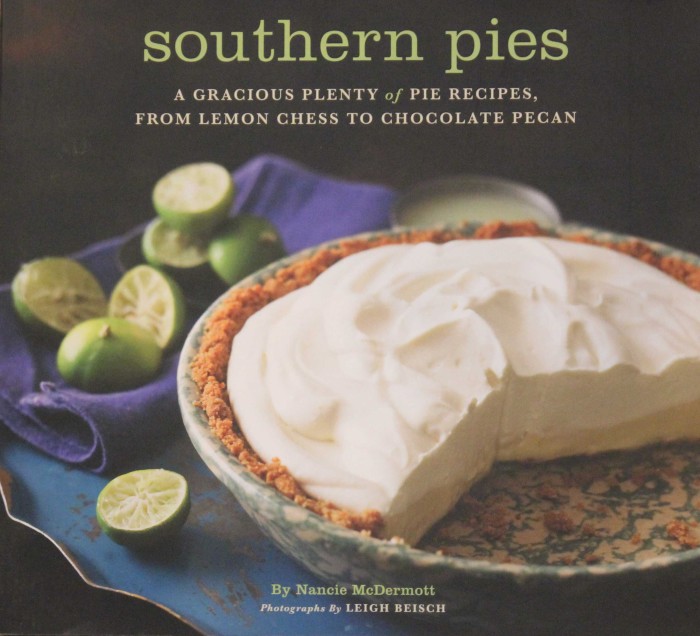 This is not a brand new cookbook, 2012, and it’s still far too young to be a Throwback Thursday offering, so I’m just tossing this out to you because it’s so very delightful. And, officially, it’s fall. For many of us, fall is pie season. We may avoid spring berry pies and summer custards, but all of us succumb in the fall. There’s Thanksgiving, of course, and just about no one can pass up a silky pumpkin pie with whipped cream. Or fall apples baked to pie perfection.

Born and raised and living in the South, Nancie McDermott knows pies and Southern pie tradition. Southern Pies is filled with recipes, both familiar like Black Bottom and distinctively regional like Peanut Butter Banana Cream.

Beyond the recipes, this book is a treasure of research and history. Nancie has drawn on her own expertise plus historical books and other dessert experts. The result is this compendium of wonderful pies that you rarely see north of the Mason-Dixon Line. In fact, many of these treats are rare now even south of the line. To find them, you need to visit home bakers, or diners off the freeway, or the pages of dusty books lying on the shelves of small antique stores.

But there is richness here and pie ideas to try throughout the year and particularly in the coming holiday season.

From a friend Suzen and I have in common, Stephen Schmidt, Nancie presents an Almond Custard Pie made with a dash of rosewater. Stephen is a baking guru with insights in British baking and how it came to America and morphed in the new land.

It is, in fact, the colonial and British roots that so permeate Southern recipes. In Southern Pies you will find dashing recipes for:

You can have apple pie, or you can have Cream Apple Pie. It’s worth a test drive. And the many recipes here for sweet potato and chess variations can keep you busy for more than one fall pie season.

Coconut was, and remains, an ingredient dear to Southern bakers. Pies, and cakes too, appear in all kinds of coconut variations in Southern recipe books. Here you will find a Creole Coconut Pie made with white wine or apple juice. And there’s the Amazing Coconut Pie where a coconut custard is poured into a pie tin and, as it bakes, the pie creates its own crust. Quick, easy, and very Southern.

The Buttermilk Pie reflects multiple Southern traditions. Real buttermilk, not today’s manufactured product, is the leftover from churning to make butter. That leftover, the buttermilk, could safely sit without refrigeration. And frugal Southerners, without a refrigerator, would use buttermilk in many ways, from biscuits to pies.

Lemon, coconut, walnuts, pecans, and peanuts appear on almost every page of Southern Pies. Chocolate pies are here too, but chocolate is a “recent” addition to the typical Southern pantry. If you want to be orginally Southern, you should try the Molasses Pie. You’ll enjoy this Southern Pies for both its recipes and its description of our pie heritage.

Southern pie baking in rural areas was a way to use every last bit of the energy of a fire. After the meat and bread were baked, then, when the oven was still warm, a pie could be nestled into the oven for a slow and final bake. That “use-everything-and-use-it-well” philosophy is reflected in these recipes. A custard may be a simple idea, but perfectly made and meticulously flavored, each bite is to be relished and remembered. Southern Pies shows you how very many ways that flavoring can be achieved.

Yes, Suzen and I are going through the book page by page. One of these gems will grace our Thanksgiving table. We’ll let you know. Honestly, I don’t think I can get Suzen to bite on the Peanut Butter Banana Cream Pie. But maybe in your household?