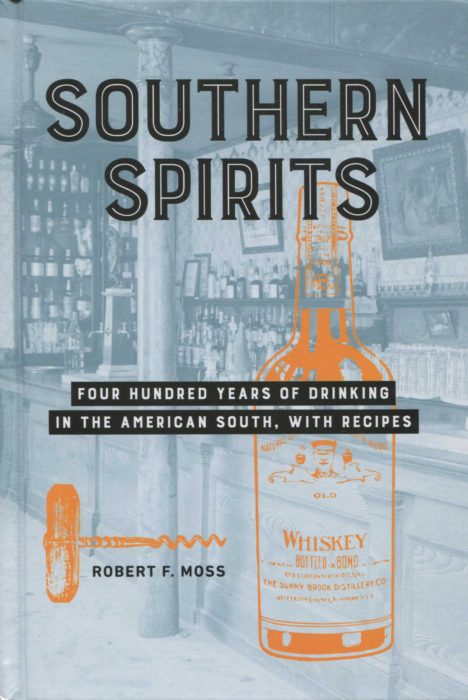 This is a book about the enjoyment of alcoholic beverages in the American South. Consequently, it will be a short review. After all, the South is simply bourbon and mint juleps. And as you drive the roads of the south and pass one lovely orchard after another — apples, of course, but oh so many peaches — well, that’s just for making pies, right?

Wrong. Very wrong. Robert F. Moss takes us on a journey of centuries to discover many aspects that will surprise you. And make you glad you are living now and not in colonial America.

Drinking in the south has a long and twisting history, one filled with surprises for us happily here in the 21st century. Are you thirsty? Want some water? It’s just a twist of a faucet away. And that water is pure and healthy.

In the 1600s, that was not the situation. Not here, not in England. There the beverages were beer and wine. All day. For everybody. The alcohol made the liquid safer, well less dangerous, to drink. When colonists came to Virginia and the Carolinas, they expected to duplicate those “common” beverages.

Slight problem. The soil, the climate, the famed terroir were all different. Early attempts at beer and wine production failed. But fruit grew wonderfully. So, apple and peach orchards were planted. Cider was produced and brandy, especially peach brandy. Growing apple trees is a tad painstaking with grafting required for many species and a few years to bear fruit after planting. Peach trees bear fruit a year or so earlier. And that meant brandy was easier.

As the colonies expanded, they added rum to their beverage portfolio. The triumvirate of slaves-rum-sugar were carried on ships from England to the West Indies to the colonies and then back to England. Rum was cheap and abundant. It often was poorly made and so rum punches were invented to “cover” the bad flavors with citrus and sugar.

The Revolutionary war changed all that. The flow of rum was cut off. But drinking simply shifted. Beginning in the 1750s colonists began to arrive in mass from Scotland and Ireland. They knew how to make whisky. And whiskey they made. Western Pennsylvania, where they quickly migrated because of the ready availability of land, became a landscape with thousands of stills. Booze was business.

When you woke in the morning, you’d sample some brandy mixed with water and sugar. Bitters were first used by the Egyptians but they became widely used by the late 1700s. Put those bitters into that morning mix of brandy and water and sugar, the beverage was called a cocktail. And cocktail enjoyment began at breakfast.

Take away the bitters and use mint instead, and you have a julep. It wasn’t invented on the wide porch of a Kentucky plantation. It was drunk morning, afternoon, and night by everyone. And it was made with every alcoholic source available: bourbon, whisky, apple and peach brandies.

The great center for julep development was antebellum Richmond, Virginia. Two slaves, who worked in a bar and paid their owner part of their wages, made the julep the drink of the world. John Dabney and Jim Cook had a special ingredient: ice. The first ice houses were now available and the two men made ice towers encasing their julep concoctions. In 1860, the Prince of Wales had a monster julep made by Jim Cook, complete with 13 straws so the Prince and his companions could simultaneous enjoy the julep, their third in 24 hours. The Prince was happy and Mr. Cook took home $20 in gold coins.

That was 1860. And we are at the point of the Civil. We are halfway through Southern Spirits and this is as far as I have read. I’m taking this book one chapter at a day, reading it and not skimming at all. It’s far too enjoyable. So I have yet to read about the whiskey boom after the Civil War, the rise of moonshining during Reconstruction, the impact of the temperance and Prohibition, and the rise of bourbon and whisky and cocktails in the post-Prohibition era. I am enjoying the book immensely, complete with its sprinkling of historic cocktail recipes. I’m going to make myself a julep, sit back, and enjoy the journey.

I’m also planning a trip through the South, visiting the vendors where Robert Moss says you can purchase spirits made the way they were 200 and 300 years ago. I want to try some try peach brandy, made from peaches only and pure clear in color. No additives, no coloring, nothing artificial. Just peaches, the whole peaches, and nothing but the peaches.