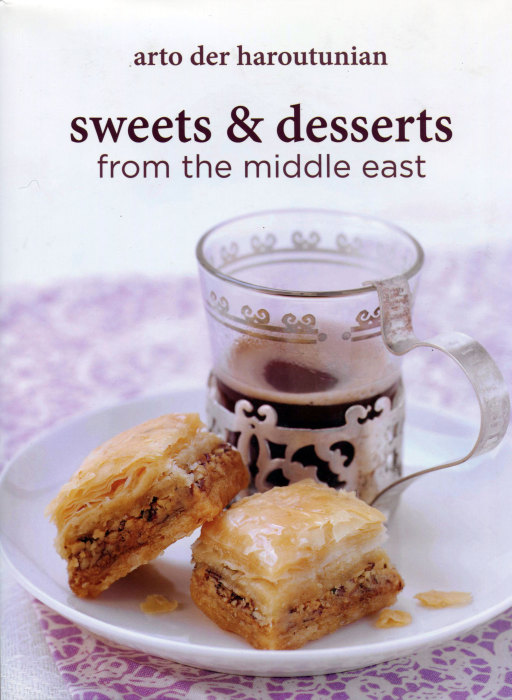 Treasure. Can I interest you in some treasure? And a little mystery and surely what seems like magic.

This week’s Throwback Thursday cookbook review is a work of genius from 1984. Arto Der Haroutunian was born in Aleppo, Syria in 1940. His parents were Armenian and his father had survived the Armenian genocide of World War I. His family migrated to England and Arto began life as an architect, designing restaurants. Then he opened a restaurant, then a chain of restaurants. And along the way he began to write about Middle Eastern food. The real food and the real recipes from his heritage. Arto died in 1987, only 47 years old. But his work lives on.

This book is his masterpiece, a survey of Middle Eastern food in all its glory and variations. And it has now been reissued in a beautifully crafted book from Grub Street. Being Armenian, Arto’s idea of the Middle East was broad: from the mountains of Armenia in the North to the Saudi deserts in the South, from Egypt and the Mediterranean coast to Iran/Persia and the borders of India.

In such a vast area, there have to be wide variations in recipes, ingredients, techniques and styles. In Sweets and Desserts, you get a sample across countries and people, more importantly across centuries.

Arto was protective of his cuisine. He notes with disdain the growing — even by the 1980s — impact of Western culinary ideas on the dishes found in Turkey and Iran. Arto dismisses chocolate as too recent — a mere 400 years old. And it is a sin by cheap bakers to put peanuts into baklava when real nuts and fruits are demanded.

If you know nothing of Middle Eastern desserts and sweets, then you might feel transported to a different world. His chapters include baklavas, fritters and pancakes [crepes], pastries, milk and rice puddings, yoghurt and cheese sweet, cakes, tea and coffee time snacks, ice creams and sorbets, jams and preserves, and drinks and sherbets. Well those chapters don’t so different do they?

You have to look inside. Here you will find:

Browse the recipes and you soon conclude something: you have no idea what can be done with phyllo.

The ingredients here are simple and pure: honey, nuts of all kinds except those peanuts, semolina, rosewater, citrus after citrus and yoghurt. Those are not the side ingredients, they are the ingredients. Those and of course the syrups that, added to the honey, make these dishes sweet beyond comprehension.

There are combinations that will seem quite unfamiliar. And for those things you do know about, like baklava, there is lovely history. Baklava is from Turkey, right? No, it’s Armenian and it means “Sweet Lent” which is why a true baklava has 40 layers of pastry, 20 above and 20 below, to represent the days of Lent.

Some of these dishes, like baklava, have some similarity to our Western style of dishes: you mix, you fill, and you bake. But there are unbaked desserts and treats here that will surprise you with their bold simplicity. For example, in the Pomegranate Sweet the seeds of four pomegranates are crushed with cookies in a bowl and covered with a syrup of sugar, lemon juice and rosewater. That mixture is return to the emptied pomegranate shells and topped with a whisked blend of yoghurt and heavy cream. It’s outrageously simple. It’s sublime. And it has been enjoyed for centuries.

When you hear “pudding” for dessert you think of some box on your store’s shelves or maybe some British treat you saw on television. Arto calls this Floating Scented Pudding one of the most beautiful in the world: 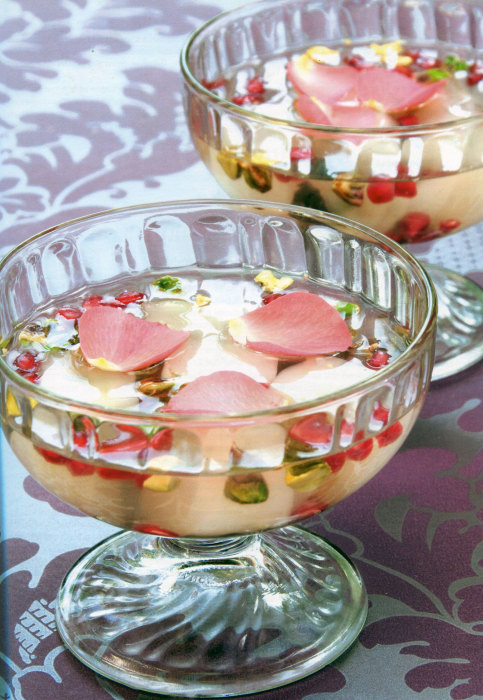 Here small squares of pudding, made with corn flour and pistachios and orange blossom water and sugar, are left to float in a scented syrup surrounded by raisins, almonds, pistachios again and those rose petals. Imagine serving this dish at your next dinner party. People will stop, take photos, and ask who could have imagined this.