Cookbook Review: The 100 Most Jewish Foods 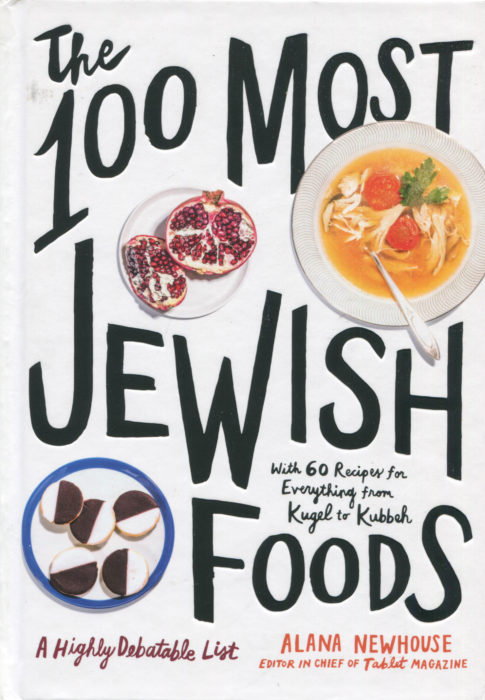 Suzi and I just celebrated our 33rd wedding anniversary. She was the first Jewish girl I ever dated. And the last.

Suzi and I immediately clicked because we both love food and already had personal collections of cookbooks. Our merged library now has about seven thousand volumes. We are both adventuresome in the kitchen. But Suzi always reminds me of the differences: she’s a nice Jewish girl from Brooklyn and I’m an Irish descendant from Oregon.

When we start discussing our recipe repertoire, I’m always finding myself outclassed:

Me: baked potato and Her: eggplant

Me: French fries and Her: chopped liver

Me: hash browns and Her: chicken soup [that can cure pneumonia]

Suzi has thousands of years of Jewish Her Jewish history is brilliantly summarized in this book: The 100 Most Jewish Foods. The subtitle is “A Highly Debatable List” because there are some controversies. What would you expect? This is a Jewish book.

There can be no debate the Chicken Soup, or Babka, or those Hebrew National hot dogs. Yes, they are better than Ball Park.

The 100 foods here are accompanied by 60 recipes. There’s a discussion of honey but it is the Honey Cake you will be drawn to. Honey, a full cup, but also lemon zest, cinnamon, ground ginger, cardamom, and even orange juice.

I love Oreos, but traditionally Oreos could not be eaten by Jews. They weren’t kosher. The Oreos had lard. Jews had Hydrox cookies which did not have lard and which, distinctly I discovered, did not taste close to Oreos. Eventually, Oreos relented. In 1997, they were certified as kosher. No more lard. And the one hundred 300-foot long ovens used to bake them? They were blowtorched to meet Kosher standards. I never liked Hydrox and, secretly, I think Suzi has always been into Oreos.

Suzi introduced me to dill, which she buys en masse. And eggplant. She has not always been health conscious. She put my first Entemann’s Chocolate Doughnut in my mouth and I gave her a kiss that left her face smudged in dark black chocolate. She was startled. I was happy.

We are a mixed family and not particularly religious. We do go to family celebrations, though. Suzi eats the Charoset [an odd uncooked mix of apples, figs, honey, lemon juice and zest, cinnamon, and toasted nuts]. I’m not a fan, probably because of those figs, but I’d be interested in a recipe that added sugar. [Lots of sugar!]

There is a recipe here for Brisket that will take time and make you think of converting. Beyond the meat itself, you’ll need onion, carrots, cloves, tomatoes, apple cider vinegar, ketchup, brown sugar, tomato paste, garlic powder, onion powder, blackstrap molasses, and pomegranate molasses. You will love the first bite, but you will also be a tad confused: so many flavors cascade around in your mouth. It’s meat and heaven offered up to you on a platter. This is the recipe you want to try from this book.

Perhaps that brisket would be the favorite, but Suzen might prefer the Kreplach, which just happen to be empanadas shaped into a square. It seems that dumplings of one sort or another have been integrated into every culture.

Suzi loves Lox while I grew up on Alder-Smoke Salmon. We compromise by eating both though I am a sucker for Lox on a Bialys [a bagel with no hole, just a dent filled with onion].

Suzi noshes on Matzo with butter and on Olives. Me? I prefer the Half-Sour and Full-Sour Pickles. You’ll find fine recipes for both here.

There is a discussion at the end about one of those debatable foods: Bacon. Author Alana Newhouse states the case simply: she could not live without bacon.

The first time Suzi came to my house, I cooked dinner. It was her first BLT. We were married in six months. Our lives are filled with bacon, bialys, bagels, brisket, babka, horseradish, every dumpling God ever devised. If you want a culinary basis for a happy marriage, I think you want The 100 Most Jewish Foods.