Cookbook Review: The Language of Food by Dan Jurafsky 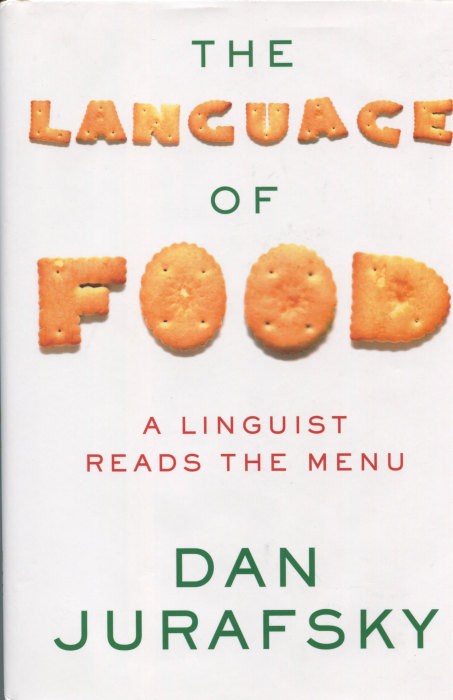 Are you a foodie? A sometimes baffled foodie? Like, why are some macaroons made with coconut and others are sandwich cookies made with almonds? And what do either of these things have to do with macaroni? Obviously nothing. Well, actually, you have food cousins there, as strange as that might seem

The Language of Food is the work of a genius. Really. A genius. In 2002 author Dan Jurafsky won a MacArthur Fellowship. He is a professor of linguistics and computer science at Stanford and a most talented and interesting fellow.

This book has the perfect subtitle: A Linguist Reads the Menu. Dan has applied his multiple skills to address a very eclectic range of topics in this book. Dan explores the oldest known cookbooks, song lyrics and fables as the early sources for foods that are have evolved in ways that we could barely imagine. Dan dwells on the language we use to describe and enjoy food and even how food manufactures choose names for ice cream and crackers that sound like the food tastes to our brain.

Some sample chapters include:

How to Read a Menu offers a readable and very informative statistical analysis of thousands of restaurant menus showing what very different wording is used by high-end, mid-range, and cheap food restaurants. If the menu says “real whipped cream” you are in an economical restaurant.

From Sikbaj to Fish and Chips takes you on a journey from 6h century Persia to the London of Charles Dickens to today. The Persian shahs had a favorite dish: sweet-and-sour stewed beef called sikbaj. Dan traces the spread and morphing of that dish until it ended up on the streets of London as fish and chips. It’s a story of sailors, Spain, and wandering Jews.

Ketchup, Cocktails, and Pirates will turn your head around. Tomato Ketchup? Oh, very American idea, made in Pittsburg by Heinz, right? Dan explains that ketchup, which is a pair of Chinese syllables that has persisted for thousands of years, began as fermented fish sauce in very ancient China. There are British trades involved importing that fish sauce as very pricey exotic condiment, people wanting to make cheaper knockoffs of the original, and clever Americans with a surplus of sugar and tomatoes. Just remember, when you ask someone to pass the ketchup you are really speaking Chinese.

For the last example from this book, Macaroon, Macaron, and Macaroni takes you on a journey from the early high civilization of the Muslims, though Sicily [ruled by Muslims, British‑conquering Normans, and finally Sicilians], and subsequently across the rest of Europe. The coconut macaroons I remember as a kid are a product, not of thousands of years of recipe crafting, but are merely an accidental offshoot of the American Civil War. After the War, Caribbean coconut became widely available and was embraced in the South for that bevy of coconut desserts we associate with that region. And along the way, Jews became fascinated with the flavors and adopted it as the perfect Passover substitute.

Back in Europe, the original Muslim almond treats were extended, morphed, and certainly improved. Today’s pricy macarons, colorful and filled with frosting between the two crunchy cookies, are the current evolution we all enjoy. But that evolutionary tree has other branches, some sweet and some savory. There is a savory branch, called macaroni, that does share its origins with those colorful Parisian treats. Think of that with your next bite of macaroni and cheese.

Dan’s journeys are long, twisting ones. He is an excellent guide so you never get lost. But when you begin in, say, Persia, you have no clue you will end up in London. There is surprise and intrigue along the way.

And you gain real perspective on how much we owe earlier cultures for the delights we have today. Gunpowder is made with an ingredient commonly known as saltpeter. It was Muslims who discovered that if you add saltpeter to water, you drop the temperature enough to cool mixtures in a container surrounded by the water. In fact, you can cool the mixtures enough to create sherbets and ice cream. Today’s home ice cream maker with salt — the best way to make home ice cream actually — has its origins long ago and far away.

Tracing our food history, through the words and actions of diverse peoples over hundreds or thousands of years, requires the wisdom and skill of a true genius. I look forward to Dan Jurafsky’s next book. I promise you, if you pick this book up, the only reason you might put it down is to eat some ice cream.