TBT Cookbook Review [with a recipe]: The Constance Spry Cookery Book from 1956 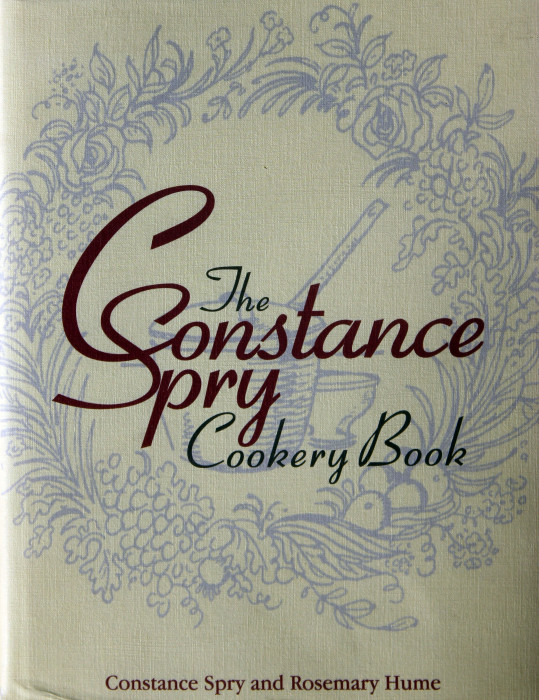 It is Throwback Thursday. Time to review an old cookbook with great contemporary value. We are going back here almost 60 years, to 1956 and the publication of The Constance Spry Cookery Book.

First things first. “Cookery” is an odd sounding word to Americans, but it is the common British term instead of just “cooking.” It actually has a double nuance, officially defined as the “art of preparing food by the application of heat.” It’s not just cooking. It’s an art. And heat, the mechanism for transformation, is right there. British cuisine is cooked, not raw. The term cookery has been part of the language since the 14th century.

Who was Constance Spry? Think of her as the English Julia Child + Ina Garten +  Martha Stewart. Someone very accomplished, and very talented, and on a very grand scale.  Born in 1886, she served in the Dublin Red Cross at the start of World War One, then head of the women’s staff [welfare and medical treatment] at the Ministry of Aircraft Production.

After the war, something drew her to flowers and she quickly became the most famous florist for high society in London. Famed for her arrangements based on Dutch 17th and 18th century paintings, she scoured the byways of London to find unusual objects for containers and she employed unexpected garden elements including weed, grasses, and ornamental kale. By 1934, she had 70 employees.

When World War Two broke out, she expanded from gardens with flowers to gardens for food during a time of stress and conservation. She cultivated roses while working with co-author Rosemary Hume [whose Au Petit Cordon Bleu cooking school in London fell victim to World War Two shortages], to fashion new recipes, gather historic ones, and assemble this thousand page volume that is an early British version of The Joy of Cooking.

Cookery is vast, detailed, and lovely. The purpose of the book was to take the knowledge of culinary professionals and write it in a form that British housewives could understand and use. It was, and it remains, the British cookery [and cooking] bible.

It’s lovingly dated in places. There is unchanged wording from the 1956 edition about parsnips mentioning that there used to be more sugar available. World War Two food rationing did not officially end until 1950 and there were cultural and economic ramifications in Britain all through the 1950s. So the Parsnip Galette recipe, using sugar, is treated here as an old friend that hopefully will come back to life when times are better. And now, they are.

There is a tradition of decrying British cuisine. Constance would battle anyone saying a disparaging syllable. If you scan this book, you’ll be amazed at the ideas. She borrowed heavily from France, loving the marriage of French technique with British ingredients. British terroir is certainly not what you will find along the Loire or in Provence. France, and no other country, is the inspiration here. There is little pasta, for example, but a glorious range of soups and sauces. Desserts aplenty, soufflés, and mousses. It’s not simple borrowing. It’s more of an appreciative marriage, with those British ingredients — a gammon of bacon — given a fresh French buff of herbs and spice.

And there are things here that you have never seen. Suzen and I will be experimenting. For example, the Bananes Gratinees which is French [google “bananes gratinees and paprika”] but seems like some Hungarian-Italian-Swiss fantasy: bananas are first pan cooked in butter with salt and paprika, then sprinkled with bread crumbs, Parmesan and Gruyere cheeses, and baked. We are going to attempt this and offer it to dear friends, ones who are happily eager to be the testbeds for the very new or the very different.

Perhaps a little less extreme, the recipe below for Tomato Ice offers a velvety different take on how to create a shrimp or lobster cocktail. The British are seafood fanatics, and their repertoire goes far beyond mere Fish and Chips. So, this Tomato Ice may be the way you break the ice and consider looking at The Constance Spry Cookery Book. It will entertain and fascinate you.

If you are a foodie, if you love food history and "old recipes, then this is a book you simply must possess.

Make the mayonnaise yourself from scratch, using lemon juice instead of vinegar to sharpen the flavor. Incorporate the ingredients in the order given. The tomato puree is added if the fresh tomatoes are poor in flavor or lacking in strength. Taste and adjust the seasonings. Pour into a container and freeze. The mixture will be thick yet creamy.

The Tomato Ice may be use either as an accompaniment to grilled sole and turbot or as the base of a prawn or shrimp cocktail. Freshly chopped herbs as well as shredded or chipped lobster may be added to the mixture together with a dash of brandy or sherry, so turning it into a lobster ice or frozen lobster cocktail.