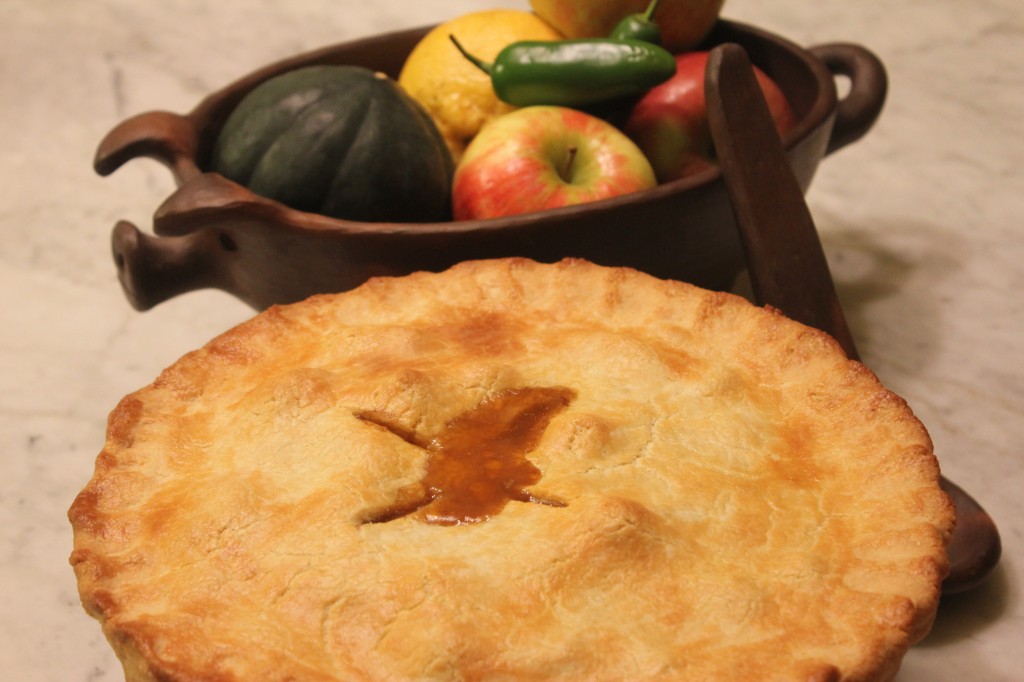 Yesterday’s post called for a Rich Shortcrust Pasty. Here it is from Pie by Angela Boggiano. The “richness” here is achieved by using only butter for the fat and even 1 tablespoon more than in the “standard” shortcrust pasty in Pie.

Angela says that this crust is fine for both sweet and savory dishes. For sweet ones, she recommends the addition of confectioner’s sugar. For additional flavor or texture, you can add spices, like cinnamon or nutmeg, or grounds nuts, like walnuts or almonds.
This particular dough is softer and more difficult to handle that a standard shortcrust recipe. So, you will want chill it thoroughly, at least for the 30 minutes stated in the recipe and ideally for a few hours. When you remove the dough from refrigerator, let it warm and soften slightly then roll out between two sheets of waxed paper.

The lemon juice in the recipe, perhaps an unexpected ingredient for you, has a very specific purpose. The juice slows gluten formation in the dough which would toughen the crust. This juice, and minimizing the amount of rolling you do, are key to having that soft, dreamy crust you really want.

Pie is a book filled with ideas to consume you year round, but particularly during these colder months. Chapters offer pie basics on dough and problem solving, savory pies for the table, handpies for individual delectability, noble pies that can centerpiece a holiday table, and sweet pies both old and new. All the recipes are grand but here are some specifics to tempt you:

We’ve done that Chocolate-Filled Pear Pudding recipe which can only be described as stunning. Cored pears are filled with a chocolate and cream mixture, wrapped in puff pastry, then baked and consumed in ecstacy. I was to to take a picture, but my fork got in my way.

Yield: 10 ounces of dough, enough to top a typical pie

Sift together the flour and salt (and confectioner’s sugar if making sweet pastry). Cut the butter in cubes and add half of it to the flour. Gently and swiftly rub the fat into the flour until it resembles coarse breadcrumbs. Add the rest of the butter and mix until it is the size of small peas.

Make a well in the center with our fist. Mix the beaten egg with the lemon juice and water and gradually pour into the well a little at a time, using a knife to mix the dough as you go. If the mixture looks like it has sufficient liquid to form a dough, don’t add all the liquid as the absorbency of flours varies.

Turn out onto a floured board and knead lightly until smooth. Shape into a ball, wrap in plastic warp, and refrigerate for at least 30 minutes before use.