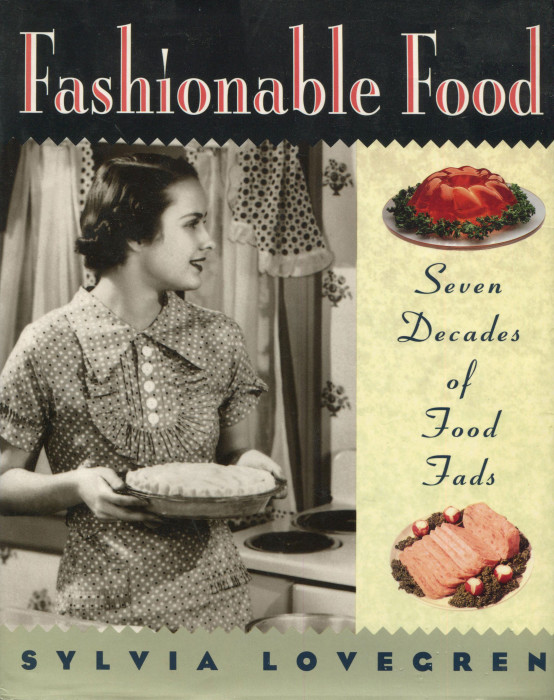 Fashionable Food is fabulous. It was published in 1995 and, I am sorry to admit, I just discovered our copy. Suzi and I have a lot of cookbooks, a lot. And sometimes things go onto shelves so you can read them soon, and then soon becomes a lot of years, a lot.

Did I say this book was fabulous? Or fascinating? Heck, it’s both.

Sylvia loves old cookbooks and is herself fascinated by the history of cooking. This book discusses food fads, both wonderful ones and — as you will see — some pretty incredibly bad food idea. She covers seven decades, the Twenties through the Eighties, with each decade getting its own chapter. And I’ve only made it through that first chapter on the Twenties, but already I can heartily recommend this book. If you love food history, if you wonder how our food culture has changed, then this book is superior.

It’s a combination of cookbook and culinary history. Each decade is discussed in terms of the changes taking place: what new foods and equipment arrive, what are the “in” dishes, what changes occur in how we cook. And interwoven in that discussion are sample recipes: some good ones, some pretty outrageous ones, but all of them authentic to that time period.

The Twenties were a decade of decisive change in how we cook and eat. Prohibition had a numbing effect: restaurants, who survive on the margins of spirits and wine, faded away and were replaced by Tea Shops. French chefs returned home. And a changing economy meant that middle class families often now made do without a maid to absorb the burden of cooking. It was up to Mom.

The food industry truly began to dominate our culinary lives. They provided both food and propaganda. The benefits of canned fruit, over that dirty stuff that was fresh off the farm, was lauded. Canned pineapple appeared in almost everything. And the Burpee Seed Company was able to dominate the lettuce market with something called Iceberg, the head lettuce that became synonymous with the word lettuce.

Salads were a big deal, but they trick was to hide those “natural” ingredients and make sure that sweetness was dominant flavor tone. So you have very popular tomato-pineapple salad:

Cut the tomatoes in sixths, partly through to the solid part at the stem. Press gentry apart until the tomato is like a water lily, about two-thirds open. Place the tomatoes on lettuce leaves and fill the centers with crushed pineapple. Garnish with mayonnaise.

Okay. What can say? Yummy? No, it pretty ghastly. If you tried to serve this to your family now, you’d be faced with divorce and children seeking emancipation.

But, it gets worse. There’s a Banana and Popcorn Salad using a sliced banana topped with popcorn and mayonnaise sitting on a lettuce leaf. At least it does not involve peanut butter.

Sylvia goes at lengthy about the way “new” things were put to use. Gelatin, aspic, and Jell-O were major players in fashioning salad meals. Ever had aspic? You should do it once. Just to say you have.

General Electric supplied both the refrigerators and recipes. They loved frozen things. Like salads, yes, frozen salads. They created a Fruit and Flower Mission Frozen Cheese Salad where you mixed cream cheese, mayonnaise, and whipped cream with pimientos, bell pepper, pecans, and paprika. You froze it and then served it. With mayonnaise. Iceberg lettuce leaves were optional.

I read the Twenties chapter this morning and this book is a real page turner. Every turn of the page has me asking, “They did what?”

Now, not everything is bad. The original Lady Baltimore Cake is here. Those same yellow cake layers can be employed in a lovely Marshmallow-Coconut Cake. And Devil’s Food cake, that first appeared in 1898, now arrives in a more refined recipe complete with classic vanilla boiled icing.

And there’s a new cake that, in the Twenties, thrilled everyone and was the centerpiece for any upscale dinner party: Pineapple Upside-Down Cake.

You have to give those people at Dole credit for some of the earliest mass marketing masterpieces.

I’m off to read about the Thirties. I love this book and you will too, just find a copy and settle in.

Sylvia wrote this 21 years ago. I looked her up and was delighted to see that, after all that time, she has a new book: Melon, A Global History. I’m getting my copy of that now. I’m not wasting another 21 years.