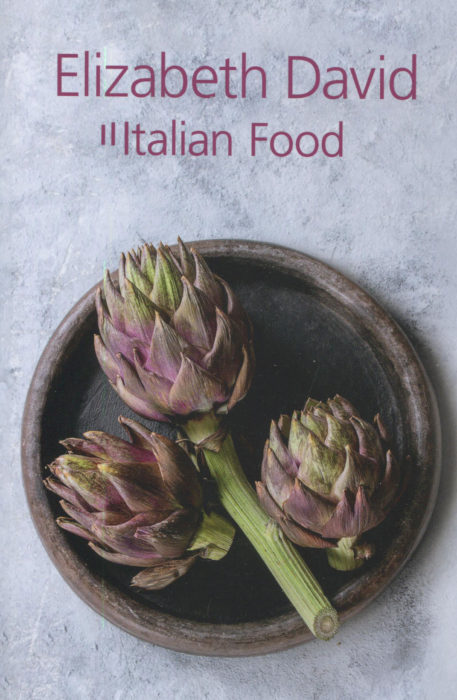 Elizabeth David [1913-1992] was a remarkable woman. She was born into an upper class family and rebelled. In her late teens and twenties, she left England for Paris, studied art, fell in love with a married man, and sailed the Mediterranean with him in a small boat. They almost landed in German hands when they were in Greece and Germans invaded.

She settled in Cairo for the war but returned to England in 1945 after the war ended. You’ve heard in the past that British food is horrid. It is wonderful now but in the late 1940s it was terrible. Elizabeth’s years in France and beyond had taught her how good cooking could be, should be, including home cooking. She wrote magazine articles about French food for her British audience. Her reputation grew and in 1950, at age 36, she published her first book. She wrote eight books between 1950 and 1984. Four more were published after she died. She had major impact on British culinary life and was famous for her dedication to the highest standards for ingredients, preparation, and presentation.

An American comparison? Perhaps Julia Child who personally wrote how important David was to her.

Italian Food was an early book published in 1954. When you pick it up, you are struck by how “old fashioned” it is. And then you realize how “homey” it is.

There are no pictures. Ingredient quantities are usually absent. David assumes you know how to cook and have some common sense. Ah, how life has changed for us!

Here’s an example of a typical recipe in the book:

Fettucine is the Roman name for homemade egg tagliatelle or noodles. When cooked, very generous helping soft butter and grated cheese are stirred into the pasta and left a minute or two to melt.

More butter, more cheese, on the table. With a good unsalted country butter this is a dish worth eating.

And so this intense little book of Italian fare goes. Chapters are devoted to:

What is Pasta Asciutta? Oh, you need to read the book. Beyond the recipes, David weaves wonderful stories of food history with full details and a love for controversies. Italians have fought forever about their food and David relishes the battles between partisans of modern and traditionalist cuisines.

To write this book, David spent a year in Italy, traveling and eating and writing. At the time, the British thought Italian cooking was just an array of pasta and veal recipes. David completely redefined Italian cooking for English audiences and was instrumental in securing the acclaim Italian cuisine always deserved.

What did, in mid-century, Italians really eat at home. Italian Food gives you that story, in detail from North to South. For example, in that Fish Soups chapter you’ll find:

Ravenna Fish Soup [using a broth made with fish heads]

Fish Soup with Prawns [mussels and prawns and broth]

This is David at her best. Authentic recipes from cities and regions, with specific local ingredients contributing to their distinctive flavor. Some recipes are very simple, and some are “major mixtures” of ingredients — a style of cooking we don’t do today at home. But Italians did and thanks to David we have this historical snapshot.

Where are the rich Italian desserts? The cakes? The cookies? You won’t find them here. This book is focused on home cooking and home desserts were most often simple fruit. Those more complex desserts were bought at pasty shops and brought home. Too bad that David never had the chance to explore that avenue as well.

Italian Food is an historical work. Now you can enjoy this authenticity in your kitchen and travel back to Italy in the 1950s. It’s quite a journey. You’ll have fun and quite a wide latitude in just how much salt and butter you sling into the pan. For this book, you’ll need to taste test. A lot.