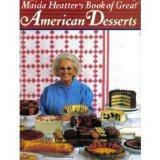 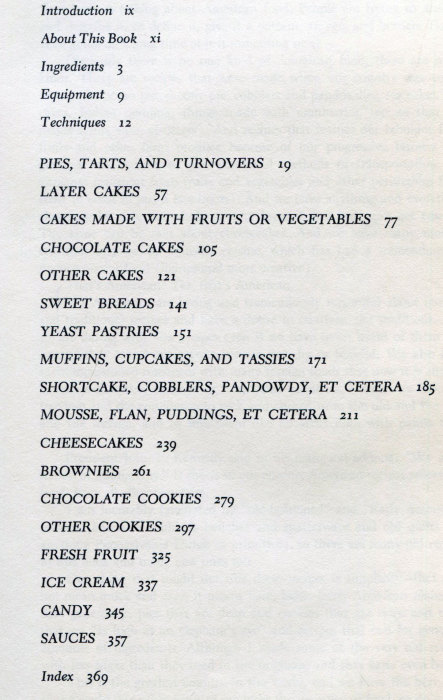 The small cover picture above comes from Amazon followed by the Table of Contents. I don’t have a big cover picture because, my own cover long, long ago disappeared. Suzen and I have over four thousand cookbooks yet this is the only book whose cover has been worn out.

Classic as these books are, they are no longer in print. You can still track down copies on Amazon and I do suggest you add them to your dessert library.

If you only have space for one volume by Maida, then this is the one to begin with. As that table of contents shows, the full spectrum of American dessert lore appears between the covers.

I appreciate the book for the bounty of recipes it provides: the very best brownie recipes, for example, and then those “other ones” that are surprising and exotic.

Let’s look at the brownies, first. Maida was selling brownies at age 10 and she recommends traveling with brownies, individual wrapped, to warm the hearts and turn the heads of those you met along the way. She presents what she believed, at least 30 years ago, was the first published brownie recipe from Maine in 1914.

Although she was born on Long Island, Maida has spent a great deal of time exploring the cuisines of Southern desserts. The header notes for the recipes show her deep research into each recipes, often with a tour of the many variations that evolved in rural settings. For example, the Banana Black Cake is described as one of the family of Southern Black Cakes, typically dark, heavy and made with fruit. This Banana variation is different: filled with dates, walnuts, blackberry jam, bananas, and buttermilk. Plus just about every spice in your cabinet.

You’ve probably never had a dessert like this and just reading the recipe makes you pause. Maybe, just maybe we should all spend some time this weekend assembling this banana boatload of flavors.

Maida actually drew upon the dessert traditions across the nation – this book is titled American and not Southern of course. Some other cake ideas include:

I could go on raving and listing recipes chapter by chapter, but I hope by now I have convinced you that this class dessert cookbook is one you want to test drive. Once you begin using this book, prepare to need it close at hand. And prepare for the cover to fall off in less than a decade. That’s the ultimate cookbook praise.