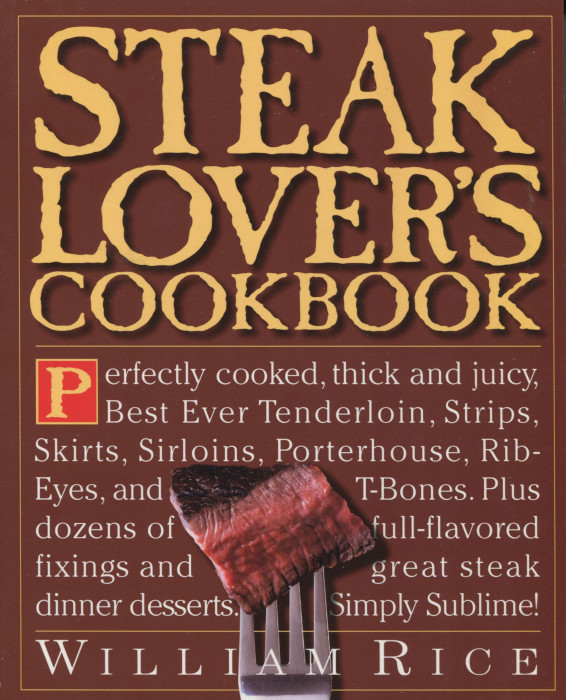 You may not know the name William Rice but for decades he was the Food Editor for the Chicago Tribune. He attended the Cordon Bleu Cooking School, cooked and baked in France professionally, and was a food writer and journalist of prominence before moving to the Tribune. He only wrote one cookbook, in 1997, but it is just what you would expect from a male foodie in a big meat town: Steak Lover’s Cookbook.

It’s a well written, almost terse book that is easily followed. Today, I bought a rib-eye steak to grill. Turning to Page 85, there’s a description of why rib-eye is ideally tender and a recommendation for Pinot Noir Beurre Rouge, based on French tradition and, I think, those two year at Cordon Bleu. Of course, William does offer rib-eye options:

The book is divided into four sections:

For those starters, you’ll find

To pair with the steak, the ideas include:

After the steak comes:

They age steaks to make them better. All in all, I’d say that the Steak Lover’s Cookbook has aged pretty darn well. I know, that Mud Pie might seem dated, but a Mushroom Strudel alongside a great steak seems to be a marriage that should never end.

If you remain a hardcore steak person, then this book is one you will use just as I do. The recipes are simple, the preparation easy. In one page, you have something with distinction. From a foodie in Chicago via France.