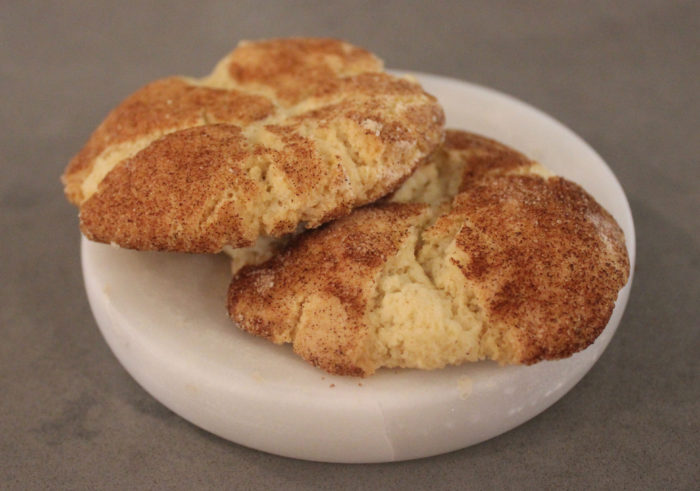 The name “snickerdoodle” probably is German, at least according to The Joy of Cooking. I can remember walking by bakeries in the 1950s with their doors open and aromas pouring out to the sidewalk. The pungency of the cinnamon from the snickerdoodles was always a dominant note that made walking into the bakery a mandatory act. Well, I took it as mandatory.
Besides the usual chocolate chip cookies and brownies, bakeries often had an abundant supply of big sugar cookies and these snickerdoodles. Snickerdoodles are not sugar cookies topped with cinnamon and certainly not in this version made with browned butter. Browning butter gives it flavor that people describe as “nutty.” And it shines in this version from The Sprinkles Baking Book.
Yes, the recipe below is correct: 1 ½ tablespoons of vanilla. That means, use good vanilla!
You can make these snickerdoodles, freeze them, and secretly pull them out at 2AM without your spouse having a clue. As long as she is not weighing the zip lock bag each day.

In a medium bowl, combine the flour, cream of tartar, baking soda, and salt. In the bowl of a stand mixer fitted with the paddle attachment, beat the browned butter and 2 cups of the sugar on medium speed until light and fluffy, 2 to 3 minutes. Reduce the speed to low and beat in the eggs, one at a time, and the vanilla until just blended. Slowly add in the flour mixture and beat until just combined.

In a small, shallow bowl, combine the remaining 2 tablespoons sugar and the cinnamon.

Portion out 3 tablespoons of the dough at a time and form the dough into balls. Roll each ball in the cinnamon-sugar mixture and arrange the cookies on the baking sheets, five per sheet, spacing them at least 5 inches apart. Bake, rotating the sheets halfway through for even baking, until the edges are lightly browned and the centers of the cookies are set but still soft, 14 to 15 minutes for chewier cookies and 16 to 17 minutes for crispier cookies. Cool on the baking sheets for 5 minutes, then use a wide metal spatula to transfer the cookies to a wire rack to cool completely. Repeat with remaining dough.