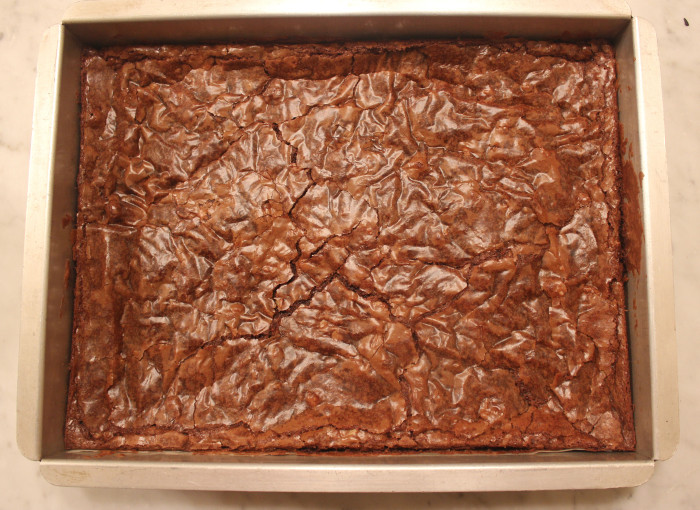 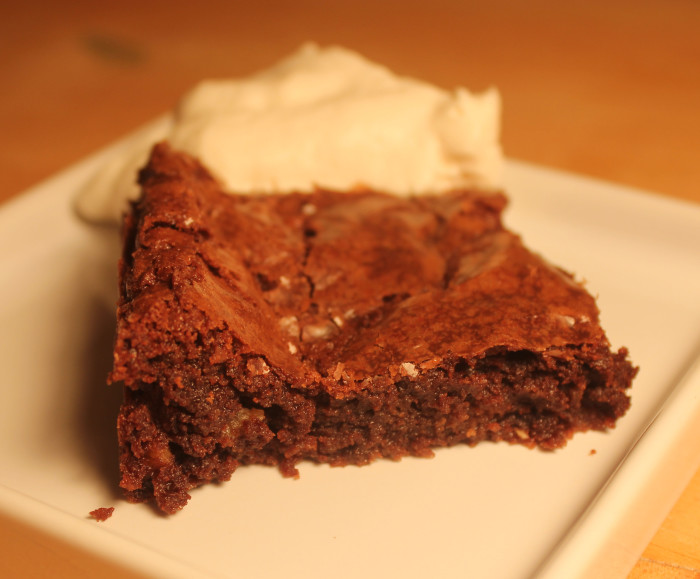 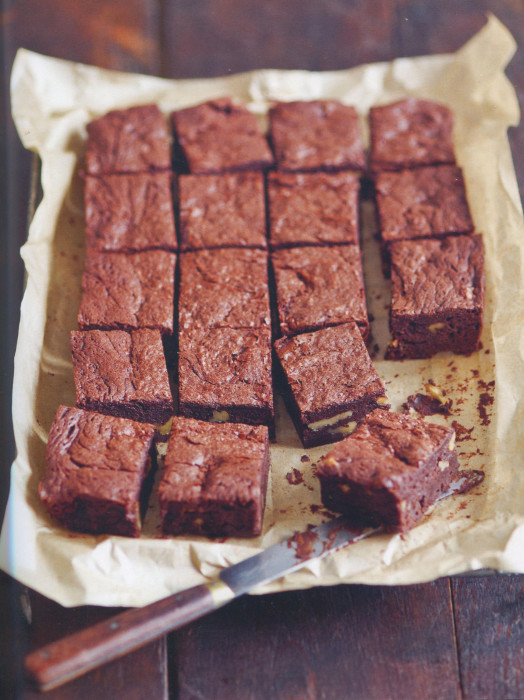 Last month I post this brownie using the third picture from the top here, the picture from the book. Well, I could not let that recipe go uneaten. So the top two pictures are mine. We made, we ate, we ate more, we photographed, we ate still more, and now I can vouch for sure: great recipe.

This are fudgy brownies and you pull them from the oven the way that first picture shows, a cooked and cracked top. I may have pulled them a tad too soon for my were less high and surely moister than the ones shown in the book. My flatter and fudgier version benefits froms some whipped cream when you eat them. Wait a day, and the brownies do dry out a tad. Wet, dry, out of the oven or a couple of days later, these are inconic brownies. Lovely to devour. In fact, you can just bend over, inhale the chocolate and say, "Ommmm." Yeah, that good.

Here's the rest of the orignal post from last month. Don't wait. Bake!

Here is the first recipe in the book: Chocolate Fudge Brownies. How is the fudgy flavor achieved? Compared to a standard brownie recipe [Maida Heatter’s All American Brownie], this one has 5 times more chocolate and 2 times more butter. It’s just decadent. But it’s a brownie so decadence is expected. Demanded. Desired.

After you bake these, resist the temptation to cut into the warm brownie and begin eating. It’s way, way too fudgy. You have to wait, refrigerate, and the slice. It’s a test of character. You’ll be fine. You can always warm them up — in the oven, not the microwave.

Put the eggs and sugar in a large bowl. With a balloon whisk or a hand-held electric whisk, beat together until smooth, very thick and pale, and no sugar is left in the base of the bowl.

Melt the chocolate and butter in a heatproof bowl set over a pan of barely simmering water. Do not let the base of the bowl touch the water. Stir frequently until smooth and well mixed. Put the vanilla extract and coffee granules in a cup, add the boiling water and stir until dissolved and smooth. Add the melted chocolate and butter to the egg and sugar mixture, followed by the coffee infusion and stir to mix. Fold in the flour, then add the walnuts and gently stir through.

Spoon the mixture into the prepared baking pan and bake in the preheated oven for 35-40 minutes until just firm to the touch. Remove the brownies from the oven and leave to cool in the pan, then turn out onto a wire rack. They are best eaten warm or at room temperature but are easier to slice when chilled.

The brownies will keep in an airtight container at room temperature for 7-10 days. They are also good for home freezing.