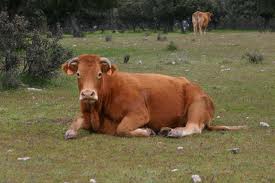 This post is not about hamburger. Or roast beef. Or ribs. Or milk.

What’s in a name? Once upon a time, a “Brown Cow” was vanilla ice cream, chocolate syrup and Coca-Cola. Quickly, the Pepsi people responded. And then there were Brown Cows made with both Coke and root beer. The marketing people in beverages are aggressive and creative.

From the folks at the milestone bakery Baked in Brooklyn, here is an adult version of the Brown Cow. Gone is the soda, any soda. In is Kahlua. The chocolate syrup is replaced by a rich mixture of real time hot cream and chocolate. It’s rich and it’s real.

We advise you to not drink this after 10PM. We do not wish to encourage insomnia.

Put the chocolate in a small heat proof bowl. In a small pot, bring the cream just to a boil. Immediately pour it over the chocolate. Let the mixture stand for 1 minutes, then stir until smooth. Spoon about 2 tablespoons of the chocolate mixture into the bottom of an old fashioned glass. Using the back of the spoon, spread the sauce evenly in the bottom and slightly up the sides of the glass.

Dividing the ice cream between the glasses and let stand for about 5 minutes to melt slightly. Pour one shot of Kahlua over each serving and garnish with a dusting of nutmeg. Serve immediately with large spoons. Consume at your own pace.