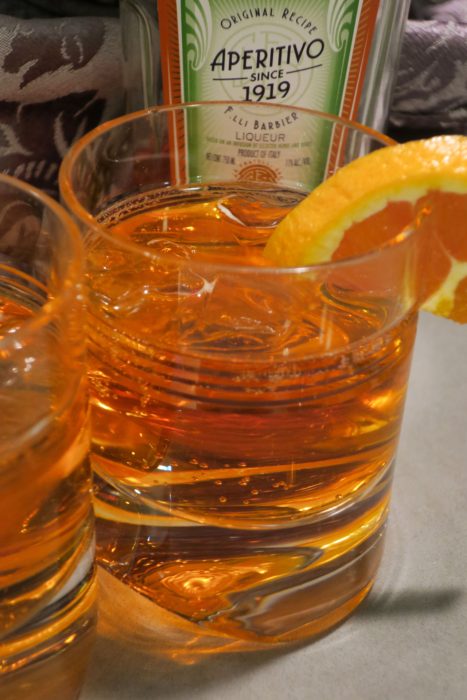 Just a week ago today, Suzen and I were in Milan. We were sitting in the lovely Marchesi patisserie as the day grew dark. We had been walking for hours and we were tired.

We, in truth, were lost. I was lost. Oh, I kinda, sorta knew where we need to go. Our hotel was over there — I could raise my arm and point to within 45 degrees — but I was clueless about the distance.

We had struggled to find Marchesi but now were established in its dark back room, sprawled in our comfortable wooden chairs and very tired. Suzi ordered two Aperol Spritzes and, this being Milan, we got little plates of appetizers to boot. Crustless mini-sandwiches with subtle mayo and sharp Italian ham. Little wedges of puff pastry dotted with cheese.

And the spritzes. Big glasses, filled with ice and the orange fluid that is an Aperol Spritz. Is the drink properly called a Spritz or an Aperol Spritz? Ah, for that answer, you’ll need to see my cookbook review of Spritz by Talia Baiocchi and Leslie Pariseau. I’ll post that later tomorrow.

If you google for the drink, you’ll find a great variety of recipes varying the relative proportions of Aperol and Prosecco. And there is the question of whether you dilute with soda water, too.

The spritz is a delight as that perfect late day aperitivo, low in alcohol, destined to gracefully translate your late afternoon to early evening.

The bottle in the background is Aperol, by the way, but you learn more about that in my review of Spritz!

Fill a large and wide glass with ice. First pour in the Prosecco, then the Aperol. Top with club soda. Garnish as you wish. Serve and enjoy.