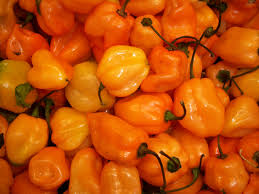 Habaneros are hot. That we all know. In 2000, with its Scoville scale of 100,00-350,000, the habanero was considered the world’s hottest chili. Thanks to genetic engineering, and perhaps man’s endless quest for pain, the habanero has been displaced from the top of that list. But never from our hearts.

This particular pepper originated in the Amazon, then spread north in the Americas and ultimately worldwide. In the 18th century, taxonomist thought the pepper came from China, hence its Latin name Capscum chinense [the Chinese pepper]. It’s American. South American. Oh, it is closely related to, but not the same as, the Scotch Bonnet.

How can we use something so potent? Let’s, let’s drink it.

Combine habanero and honey to forge a Habanero Honey Syrup. And then, unleash the dogs of war.

Well, war may be too awkward a term here. How about: rich and rapturous flavor enhancement. If you have read this blog before, you understand that when it comes to cocktails, I adopt a classic approach: a liqueur, something sour, and something sweet.

Now, let’s shift to something sweet and hot. Use this syrup in a margarita in place of simple sugar syrup. In that combination, that syrup first strikes the tongue as sweet, because it is loaded with honey. Then the tequila and lime/lemon flavors approach. But the aftertaste now is not lingering tequila. It is a rush of heat from that habanero that lingers pleasantly.

This syrup is a reward you should engage. And, if margaritas are not your beverage of preference, then tomorrow you’ll see the Habanero-Honey Syrup used without alcohol but with total satisfaction.

In a small saucepan, combine 1 cup of water and 1 cup of honey. Add the dried habanero. Bring to a boil, simmer for about 10 minutes, the let cool. Strain into a jar and refrigerate for up to 1 month.