Peaches and Bourbon: A Summer Cocktail 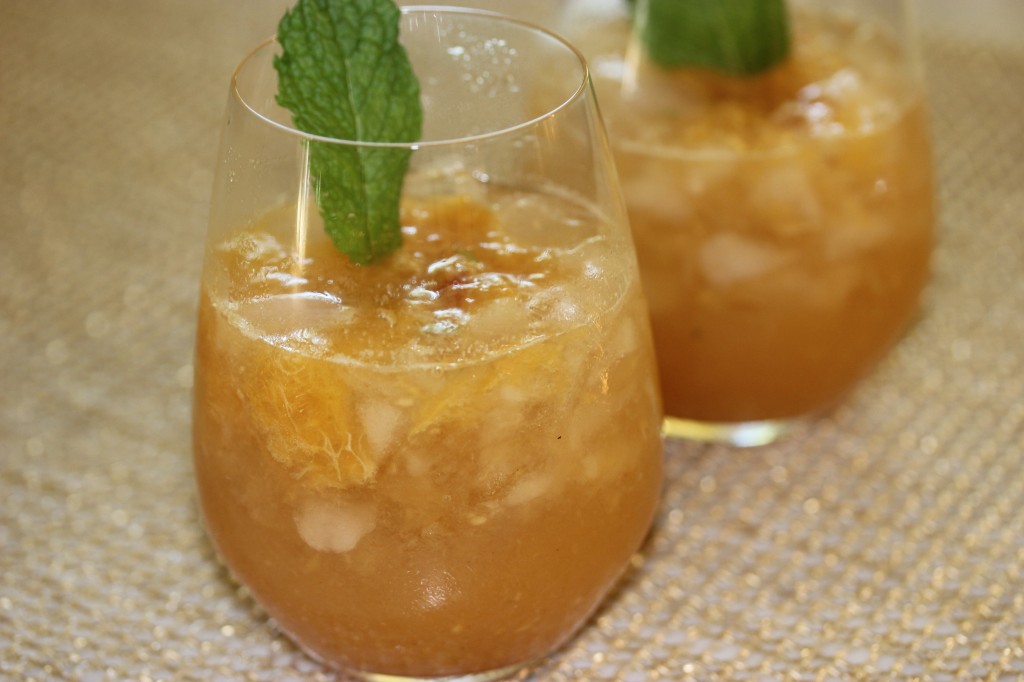 I am a rum and tequila person. Those are the spirits that move me. Literally.

Bourbon and whiskey? I get confused. I drink them rarely and off the top of my head, I can’t tell you which is which. I know, it’s embarrassing.

But I take refuge in the fact that confusion about the two has reigned for years. So much confusion that in 1964 the United States Congress passed a law making it all clear. Well, not clear, clear because bourbon and whiskey do have that golden-honey color. But, Congress has decreed that:

And just for reference, the first American whiskey was made in Pennsylvania and Maryland from rye. Bourbon is the corn spirit.

Recently in Martha Stewart Magazine, there was a recipe for grilled peaches, muddled, and mixed with Bourbon. The recipe called for grilling the peaches until they begin to blacken, probably a good idea to match the Bourbon. I stopped just short of black, because my peach halves were beginning to stick to the grill. And Martha’s recipe called for bitters. I have a shelf of different bitters, including peach. That was a no brainer.

So here’s the recipe for the beverage using Bourbon. If you are a Bourbon fan, I’m sure you’ll love it. I did enjoy it. But, more importantly, the muddled mixture of peach, sugar, lime juice and bitters was something close to nirvana. I love that mix. This weekend, it goes into rum and tequila and cachaca. I’ll let you know. In the meantime, find that bottle of Bourbon and enjoy a truly American cocktail.

Heat a grill to medium.

Coat the 4 peach halves with a little vegetable oil so they will not stick to the grill, or at least stick less.

Grill the peaches until softened. Remove and place in a cocktail shaker.

Add the sugar, lime juice and bitters. Muddle seriously. You do not want any chunks of peach here, so be patient. It’s a 2-3 minutes process.

Add the spirits and ice to the cocktail shaker. Shake vigorously until chilled.

Pour into two cocktails glasses, filled with shaved ice. There will be some peach fragments or strings stuck in the cocktail shaker — no matter how well you tried to muddle. Feel free to spoon those into the cocktails.

Sources: Inspired from Martha Stewart Magazine with reference material from The Ultimate Guide to Spirits and Cocktails by André Dominé