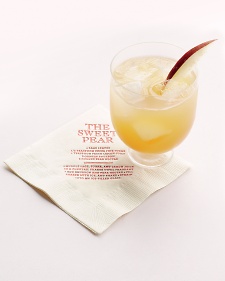 It’s true fall and your farmers market is abundant with fruit, particularly apples and pears. I have this love/hate relationship with pears that cannot be solved. When good, a pear is the best fruit possible. Of course, a pear is at its peak for all of 90 minutes it seems.

Still, Suzen and I have been looking and we have some wonderful fall pear recipes to share with you. This is the first one, a pear cocktail from Martha Stewart. Now the recipe below is exactly what Martha says, and it uses pear nectar. The recipe is good, but there are alternative paths to explore.

For example, I prefer fresh pears, over nectar

And, this recipe uses bourbon. Martha is a bourbon woman. My Suzi is not. Sometimes, the power of bourbon can overcome the delicacy of pear. So, here is what I suggest. First, make this recipe as you see it below to get that base feeling for flavor. Then, try these changes:

Muddle sage, sugar, and lemon juice in a cocktail shaker until fragrant. Add bourbon and pear nectar. Shake and strain into an ice-filled glass. Garnish with a pear slice.