Butterscotch Roll-Up Cake for the 4th of July 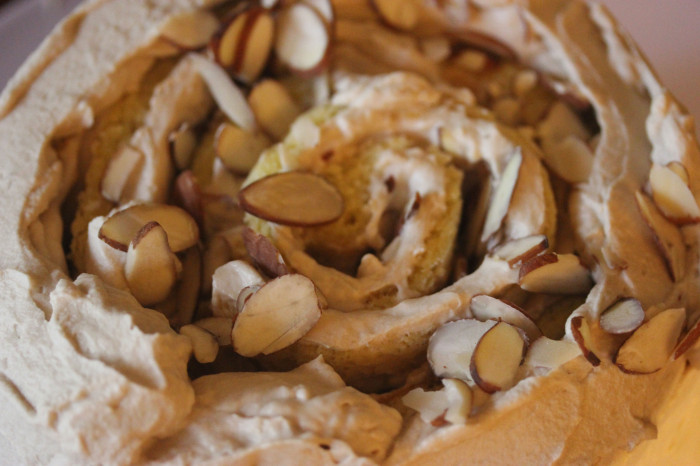 So, I begin with a mea culpa. I have a tough time frosting cakes. Mine never look like the ones in the book and it was the picture in the book that first drew me to this recipe.

But then there was more.

If you read this blog, you know that I am a sucker for roulades, those French-style sponge cakes that are long, rolled up, and filled with whipped cream, or ganache, or something that a modest sugar content. I love them.

This cake is a vertical roulade. You make the same cake, but you do don just role it long. You cut the cake into sections and roll them up one at a time to make one vertical cake that is wide, very wide.

The cake is lovely. The filling butterscotch sauce “diluted” with whipped cream.

I can envision this as just the dessert Nero had when he said, “Someone really should contact the fire department.”

This is a great cake. It’s Friday before a week with the 4th of July stuck on a Thursday. People are taking the week off, there are parties, there are brunches, there is heat, and there is a passionate need for a cool dessert. Here it is.

This wonderful idea comes from Vintage Cakes by Julie Richardson. If you bake, if you want to bake, you really need this book on your shelf. Awesomely inspiring.

To make the butterscotch sauce: melt the butter over medium heat in a large heavy-bottomed sauce pan. Dump in the brown sugar all at once and stir with a wooden spoon to combine. Cook, stirring frequently, until the mixture begins to simmer and changes from a wet sand consistency to a liquid that fives off a lovely molasses smell and looks like taffy, approximately 3 minutes from the time it comes to a simmer. Drizzle ¼ cup of the cream into the mixture and vigorously blend the cram into the sugar and whisk in the remaining cream. Turn the heat up to medium-high and allow the sauce to boil, whisking occasionally, until it has darkened, about 8 minutes. Remove the pot from the heat and allow the sauce to cool for a few minutes before adding the whisky, vanilla, and salt. Refrigerate until cold.

To make the cake: enter an oven rack and preheat the oven to 325⁰F.

Sift together the flour, baking powder, salt, and ¾ cup of the sugar in a large bowl, then whisk the ingredients by hand. In a small bowl, whisk together the oil, yolks, water and vanilla. Add the liquid mixture to the dry ingredients and briskly stir with a rubber spatula until just smooth.

In the clean bowl of stand mixer fitted with the clean whisk attachment, whip the egg whites on medium speed until frothy. Add the cream of tartar and gradually increase the speed to high, whipping until the whites just form a soft peak. With mixer on medium speed, gradually add the remaining ¼ cup of sugar in a slow stream. Return the mixer to high and continue whipping until the whites just begin to hold firm, shiny peaks.

With a rubber spatula, fold a third of the whites into he batter, using as few strokes as possible. Add the remaining whites, folding until incorporated. Pour the batter into the prepared pan and smooth the top [this is best done with an offset spatula]. Place the pan in the oven. Bake the cake until it springs back when lightly touched and is barely golden in color, 16 to 20 minutes. Cool the cake on a wire rack until it reaches room temperature.

Meanwhile, make the filling by placing the bowl of a stand mixer and its whisk attachment in the freezer for 5 minutes. Fit the cold bowl and whisk to the mixer and whip the 1 ½ cups of cold heavy cream and 1 cup of the cold butterscotch sauce together on medium-low speed until the ingredients are blended. Gradually turn the mixer up to high speed and whip just until the cream holds soft peaks but is not yet stiff.

To and assemble the cake: keep the cake into its pan and orient the pan so the longer side is closed to you. Cut the cake with a serrated knife into four equal pieces measure 4 by 12 inches. Cut through the underlying parchment paper with a pair of scissors in the same places that you cut the cake so you have four quarters of cake [with parchment paper attached] that can each move independently.

Leaving the cake in the pan, spread a bit more than half of the butterscotch cram evenly over the cake and sprinkle with the toasted almonds. Refrigerate the remainder of the cream while you roll up the cake.

Here comes the fun part: rolling the cake! With the pan still oriented with the longer side closest to you, life up the nearest edge — both cake and paper — of one of your 4 strips. Using the parchment paper as the cake’s support, begin to tuck the cake into a roll and continue tucking [and peeling away the parchment paper] while gently rolling he cake away from you into a roll. Place the rolled cake upright on a serving plate, so the spiral of cake and filling is visible at the top. [Don’t worry, it gets easier from here.]

Line the next cake strip, using the parchment paper to support it, and wrap the strip around the roll on the serving plate, beginning where the outside edge of the first cake left off, in order to create a bigger roll. Continue with the next two strips, beginning the wrap where the last left off, to make one enormous rolled up cake.

Finish by frosting the sides with the reminder of the cream [you might need to give the cream a few turns with a hand whisk to stiffen it up], leaving he top free to show of the spiral of cake and cream. Refrigerate the cake for at least 1 hour and up to one day, lightly wrapped in plastic. Just before serving, warm the remaining butterscotch sauce and drizzle it over the individual servings.

Well wrapped and refrigerated, this cake keeps up to 3 days. [Brian comment: yeah, sure, it’s gonna last that long!] 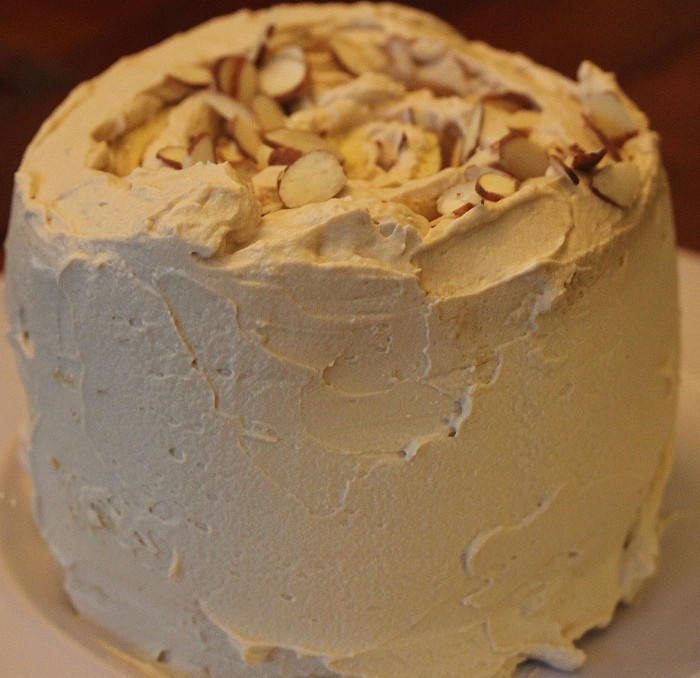