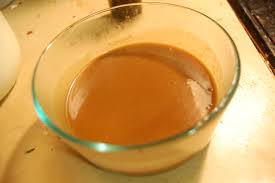 Last year, for the 4th, I suggested a Butterscotch Roll-up Cake. The cake was rolled in a combination of whipped cream and rich butterscotch sauce that had been folded into one diabetic dream. Butterscotch is a variant of caramel and, when well made, is outrageously satisfying. Just a tad can make all the difference to a dessert.

This year, I project we go more healthy. Here’s the recipe just for the sauce which is lovely on ice cream. Look for a deeply rich French vanilla that can mate with the butterscotch and not be overwhelmed.

I have always presumed that butterscotch had to an ancient treat devised by Scottish clans to deal with those nasty winters or invaders from England. Not true. Perhaps because it uses what would have been pricey ingredients — butter and brown sugar — it is recent, first appearing in the literature only in 1848. And then it was described as “Doncaster Butterscotch” from the town of Doncaster right smack in the middle of England. The “scotch” part may come from an old verb “to cut or to score.” Nothing to do with geography. Here the recipe is designed, not for cutting, but for pouring.

Although, I am told that a desperate man, with a full set of lungs, can use a straw and not a spoon.

Melt the butter over medium heat in a large heavy-bottomed sauce pan. Dump in the brown sugar all at once and stir with a wooden spoon to combine. Cook, stirring frequently, until the mixture begins to simmer and changes from a wet sand consistency to a liquid that fives off a lovely molasses smell and looks like taffy, approximately 3 minutes from the time it comes to a simmer. Drizzle ¼ cup of the cream into the mixture and vigorously blend the cram into the sugar and whisk in the remaining cream. Turn the heat up to medium-high and allow the sauce to boil, whisking occasionally, until it has darkened, about 8 minutes. Remove the pot from the heat and allow the sauce to cool for a few minutes before adding the whisky, vanilla, and salt. Refrigerate until cold.